Chile's President Michelle Bachelet has visited a 14-year-old girl suffering from cystic fibrosis who made a video appeal to be allowed to end her life.

Valentina Maureira had addressed Ms Bachelet personally in the message, which she recorded with a smartphone and uploaded to YouTube from her hospital bed without her parents' knowledge.

"I ask to speak urgently with the president, because I am tired of living with this disease," she said.

"She can authorise an injection to put me to sleep forever," she said.

Valentina is in a "stable" condition from cystic fibrosis, an incurable genetic disorder that attacks the lungs and other vital organs, making it difficult to breath and causing a host of other symptoms.

Her message has been viewed thousands of times on social networks, igniting debate over euthanasia in Chile, where it is forbidden by law. 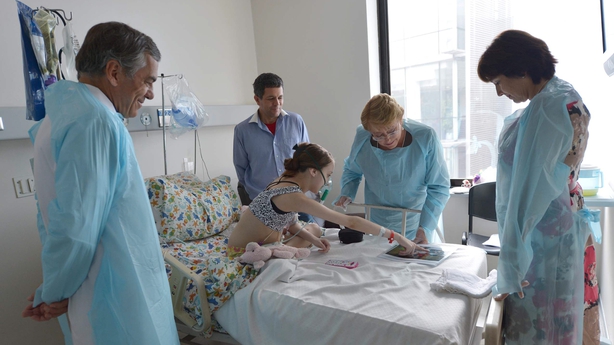 They spent nearly an hour with Valentina at the Catholic University hospital in Santiago, according to the government.

Ms Bachelet's spokesman Alvaro Elizalde said earlier this week that the government could not comply with Valentina's wishes but would cover the cost of psychiatric treatment for her and her family.

Her father Fredy Maureira said he had to respect his daughter's wishes.

"She is 14 years old and she knows this disease better than anyone," he told the Chilean press.

"It's very tough. I don't want to be going through this, but I have to respect my daughter's decision. She wants to be at rest."