The Public Accounts Committee has been hearing details of the subvention paid to Irish Water from the Local Government Fund.

Last year the utility received €439m from the fund.

Fianna Fáil TD Seán Fleming asked John McCarthy, the Secretary General of the Department of the Environment, about what figure had been pencilled in for subvention to Irish Water in 2017.

He said he thought this figure should have been contained in the department's expenditure ceilings, which would have been published as part of the Budget.

However, Mr McCarthy said the Local Government Fund was outside the voted expenditure included in departmental expenditure ceilings on budget day.

Mr McCarthy said there were some indications from the Commission for Energy Regulation about how it would take forward the five-year period following 2016, in terms of the efficiencies they would expect Irish Water to deliver.

He said there was a business planning process going on in Irish Water in order to prepare for that, which should be finalised shortly.

Mr McCarthy said motor tax proceeds were used to fund a range of things including the subvention to Irish Water.

Committee chairman John McGuinness said TDs in their constituency clinics heard criticism about the cost of motor tax, and now they were hearing that a lot of that tax was going to Irish Water.

He said the many thousands of people who had protested against water charges would not be impressed with that explanation.

Mr McCarthy earlier told the PAC that under the legislation establishing Irish Water, the Commission for Energy Regulation (CER) was charged with approving all Irish Water expenditure. 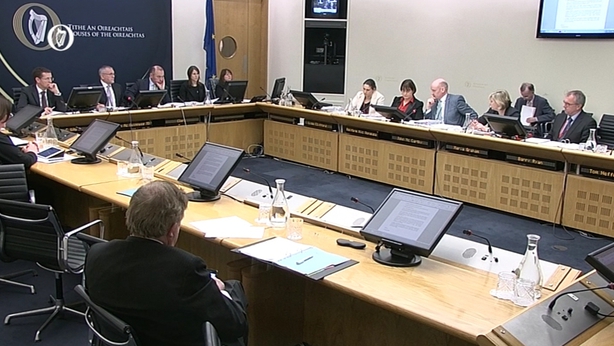 He said the CER came to the determination in relation to what was allowed in revenue to Irish Water.

He said that while the statutory responsibility has been transferred to Irish Water, it remains accountable to the minister under a number of headings including having its annual report laid before the houses of the Oireachtas.

He added that he will be the accounting officer for the expenditure of Irish Water.

"I will be the accounting officer for expenditure that goes to Irish Water through the local government fund or through the vote," said Mr McCarthy.

"Irish Water is outside the remit of the controller and auditor general. That was raised again just before Christmas and the policy position that was taken by the minister is that it should remain as is.

"Primarily taking account of the extent to which Irish Water is accountable to the Joint Oireachtas Committee, but fundamentally because all of Irish Water expenditure is subject to approval by the Commission for Energy Regulation."

Mr Fleming called for a breakdown of costs that were transferred from the local authorities to Irish Water, which the Department was unable to provide.

Mr McGuinness set a deadline of next week for these figures to be presented before the committee by the Department.