Ceann Comhairle Seán Barrett has withdrawn his claims that Fianna Fáil and Sinn Féin were trying to undermine him.

Following his statement to the Dáil this afternoon, both Fianna Fáil leader Mícheál Martin and Sinn Féin leader Gerry Adams welcomed his withdrawal of the controversial remarks.

The Ceann Comhairle also said he was to examine the possibility of getting greater clarity of Standing Order 57, under which he took the decision to allow the inquiry into allegations of garda malpractice in the Cavan/Monaghan division to go ahead without debate.

Taoiseach Enda Kenny told the Dáil he would publish all correspondence from the legal team of Alan Shatter which included observations that the former justice minister should be excluded from the terms of reference of the inquiry.

During Leaders' Questions, Mr Kenny reiterated that the Government had decided against this.

He also corrected the Dáil record for failing to say that a copy of a letter from Mr Shatter's legal firm to the Ceann Comhairle was sent to him last December.

Mr Kenny said he had signed the order today to establish the commission of investigation into the allegations of garda malpractice.

Speaking in the Dáil prior to Leaders' Questions, Mr Barrett said that at no time did he come under pressure from anyone in the run-up to his decision to stop the debate.

In the much anticipated statement, he also withdrew the comment he made during an RTÉ radio interview last week that the Opposition was out to undermine him.

He said it was in the heat of the moment.

He said he would now be seeking a meeting with the Committee on Procedures and Privileges to examine the standing order.

Fianna Fáil had been considering tabling a motion of no confidence after Mr Barrett accused it and Sinn Féin of undermining his position.

In a statement yesterday, Mr Barrett said the Opposition was entitled to question his decisions.

However, he said he stood by his ruling not to allow a debate on the establishment of the inquiry.

In the statement, Mr Barrett said he may have given the impression in the RTÉ interview last week that the “Opposition was not entitled to question my decision”. 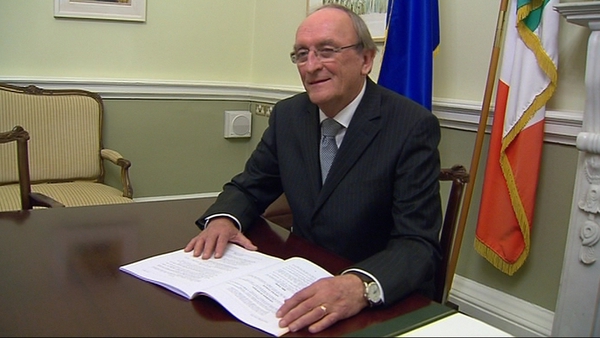