Greece's new government has proposed ending a standoff with its international creditors by swapping its outstanding debt for new growth-linked bonds.

Finance Minister Yanis Varoufakis is in London to reassure investors he is not seeking a Wild West-style showdown with Brussels over a new debt agreement.

He told the Financial Times that Athens would no longer call for a write-off of Greece's €315bn of foreign debt.

Instead it will seek a "menu of debt swaps" including two types of new bonds - one indexed to nominal economic growth and one he called "perpetual bonds" to replace European Central Bank (ECB)-owned Greek bonds, the newspaper reported.

"What I'll say to our partners is that we are putting together a combination of a primary budget surplus and a reform agenda," Mr Varoufakis told the FT.

"I'll say, 'Help us to reform our country and give us some fiscal space to do this, otherwise we shall continue to suffocate and become a deformed rather than a reformed Greece'."

Athens planned to target wealthy tax-evaders and post primary budget surpluses of 1% to 1.5% of gross domestic product, he told the paper, even if it meant his party, Syriza, could not fulfil all the spending promises on which it was elected.

Mr Varoufakis met international investors in the evening. Michael Hintze, founder and CEO of hedge fund CQS, asked afterwards if the minister had proposed a debt swap, said "It's more balanced and broader than that," without elaborating.

A Greek government source said earlier in the day that Mr Varoufakis would tell the investors they had nothing to worry about.

"We will be able to service the Greek debt on terms that will have no detrimental impact on, especially private, bond holders," said the source who spoke on condition of anonymity due to the sensitivity of the matter.

Germany's Finance Minister Wolfgang Schaeuble told Reuters in an interview earlier on Monday that Berlin would not accept any unilateral changes to Greece's debt programme.

"We want Greece to continue going down this successful path in the interests of Greece and the Greeks but we will not accept one-sided changes to the programme," he said at the Reuters Euro Zone Summit.

The finance minister and Greece's new Prime Minister Alexis Tsipras are touring European capitals in a diplomatic offensive to replace Greece's bailout accord with the European Union, ECB and International Monetary Fund, known as the "troika".

Varoufakis said he was confident he could reach a negotiated settlement soon, telling Britain's Channel 4 news it was time to stop Greece being a "festering wound" on Europe and dismissing a suggestion the ECB could block a new deal. 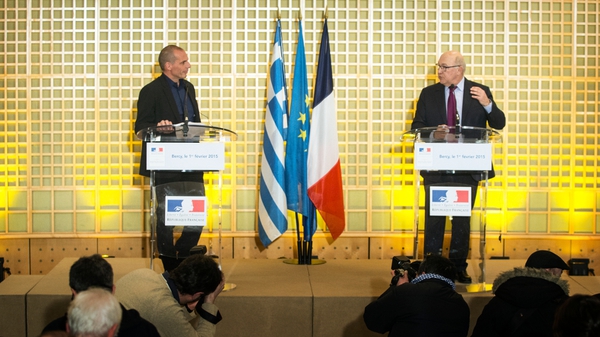 Greek finance minister wants debt deal 'by the end of May'