At least 19 civilians were killed in heavy fighting between government forces and pro-Russian rebels in eastern Ukraine.

Meanwhile, an attempt to reopen peace talks in Belarus has been aborted before it began after a rebel delegate flew to Minsk, only to announce that no talks would take place and they were flying straight back to Moscow.

Any talks would be the first since a five-month-old ceasefire collapsed with a new rebel advance last week.

The main separatist stronghold Donetsk echoed to the sound of heavy artillery fire, including salvoes from multiple rocket launchers and heavier thuds from artillery coming from the direction of the airport, a constant battlefield.

In Debaltseve, a town east of Donetsk, seven civilians were killed on Friday by separatist shelling of their homes, regional police chief Vyacheslav Abroskin said in a post on  Facebook.

Earlier he reported another seven civilians killed in and around the town in the previous 24 hours.

The government-held town is a key rail and road junction in the east. It and nearby Vuhlehirsk have come under fierce attack from rebels encircling government garrisons there, with water and electricity supplies cut off.

In the nearby rebel-held frontline town of Horlivka, eight civilians were killed in rocket attacks the previous day, the mayor's office said.

Ukraine's military said five servicemen have also been killed and 23 wounded in fighting in the past 24 hours, describing the situation in the conflict zone as "hard".

The past week has seen by far the worst fighting since the ceasefire was signed five months ago, with rebels announcing an offensive that Kiev says amounts to a repudiation of the truce.

Both NATO and the Ukrainian government accuse Russia of sending thousands of troops to support the rebel advance with heavy weapons and tanks, an accusation Russia denies.

Yesterday, EU foreign ministers agreed to extend economic sanctions against Russia that had been due to expire soon for another six months.

The US has promised to tighten its own sanctions, which have helped feed an economic crisis in Russia.

US Secretary of State John Kerry is also to travel to Kiev next Thursday to meet a Ukrainian delegation with a view to reassuring them of US support. 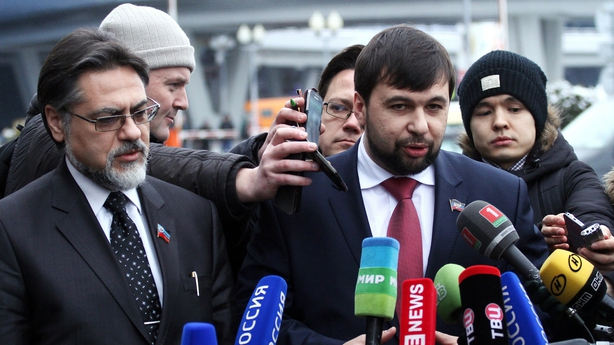 The arrival of two rebel negotiators in Minsk was the first sign of a reopening of negotiations since the rebels launched their latest advance.

However, neither Kiev nor Moscow confirmed that they were ready for talks, and one of the rebel delegates, Denis Pushilin, swiftly announced they were heading back to Moscow.

He said the rebels were prepared to press on with their offensive and seize more territory if artillery continues to fall on their cities.

The Ukrainian foreign ministry said it was ready to participate in talks either today or tomorrow, but was waiting for an agreement on draft documents.