Greek leftist leader Alexis Tsipras has told thousands of people gathered in Athens that an end to "national humiliation" was near.

He was speaking after opinion polls showed his Syriza party pulling ahead three days before an election.

Mr Tsipras urged Greeks to give Syriza an outright victory in Sunday's vote so the country could turn its back on four years of austerity under the terms of an EU/IMF bailout.

"On Monday, national humiliation will be over. We will finish with orders from abroad," Mr Tsipras, 40, told flag-waving supporters at his biggest election rally.

Mr Tsipras has unnerved financial markets with a pledge to overturn austerity cuts and demand a debt write-off from European partners.

However, his message has resonated with Greeks struggling with unemployment over 25% and wage and pension cuts.

"I am voting for Tsipras because even my parents, after 40 years of work, don't have money to pay for heating," said Maria Labridou, 55, a teacher at the rally.

"He is our only hope, the only way out."

Mr Tsipras was joined on stage by the leader of Spanish leftist party Podemos. 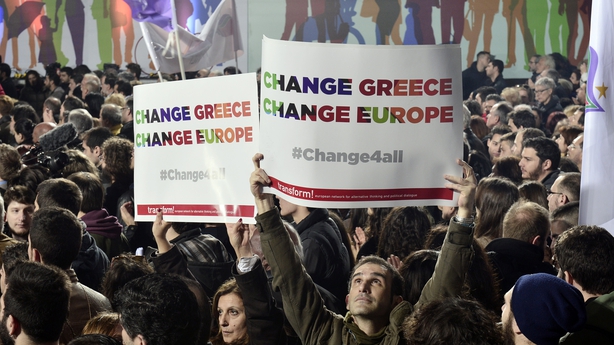 "The wind of democratic change is blowing, a change in Europe, of a change in Greece," Pablo Iglesias, the pony-tailed leader of Podemos told the rally.

Merkel wants Greece to 'remain part of our story'

"At the heart of our principles lies solidarity. I want Greece, despite the difficulties, to remain part of our story," Ms Merkel said during a press conference in Florence with Italian Prime Minister Matteo Renzi.

A poll by Metron Analysis, published today, shows Syriza's lead over the New Democracy party growing to 5.3 points from 4.6 points.

Syriza would take 36% of the vote, putting it on the verge of an outright victory, the poll showed.

A second poll, by Rass, showed Syriza leading by 4.8 points, while a third poll by GPO for Mega TV showed Syriza with a six-point lead, up from a four-point lead in a previous poll.

A fourth poll by Marc for Alpha TV showed Syriza was ahead with a 6.2 point lead, up from a 3.2 point lead in a previous poll.

The election is being closely watched by financial markets who fear a Syriza victory could lead to a stand off with EU and IMF lenders and push the country close to bankruptcy or an exit from the eurozone.

Under Greek electoral law, parties must secure 3% of the vote to enter the 300-seat parliament.

The biggest party gets a 50-seat bonus.

The level required to win outright depends on the share of the vote taken by parties that fail to cross the threshold.