Taoiseach Enda Kenny has warned of what he called "a drift to populism" that could damage Ireland's economic recovery.

He was speaking at the World Economic Forum in Davos about the Greek election this weekend in which the far left Syriza party is expected to poll strongly.

The party has campaigned on a promise to negotiate a write-down in Greek debt and an end to austerity.

However, Mr Kenny warned any attempt by Ireland to follow such a path could jeopardise the recovery and threaten jobs.

Asked what the implications for Ireland were if a Syriza government secured a significant debt write-down, Mr Kenny suggested that if Ireland suggested something similar then its "hard-won" credibility could be damaged.

He told reporters: "When a country enters a bailout ... there are conditions which are put in place which have to be achieved.

"In attempting to achieve those and surpass them, we've engaged in constructive dialogue and negotiation at all times.

"It's very easy to lose all that hard won gain and recovery by drifting towards a sense of populism without clarity as to what that might deliver."

Mr Kenny said that the election on Sunday was a "matter for the Greek people".

He said: "But speaking to Greek politicians, they understand that when you sign on for a debt write-down in terms of the bailout and the advantages that they've got, there are conditions to be applied.

"I would hope that Greece, and the citizens of Greece will decide to continue with the eurozone in this election and that whatever the outcome is [it] will have to be dealt with."

Speaking alongside Mr Kenny in a live panel discussion on economic growth and political stability, Finnish Prime Minister Alexander Stubb, who last week ruled out any concessions on Greece if Syriza came to power, appeared to soften his stance.

Mr Stubb said "The Finnish position is that we will deal with any democratically elected government and that it will be very difficult for us to forgive debt or to restructure debt at this particular.

The theme of the discussion was economic growth and political stability, and Mr Kenny was also joined by the prime ministers of the Netherlands and Latvia, as well as the German vice chancellor.

The Taoiseach is to meet a number of financial services and hi-tech multinationals today.

He is also expected to hold separate meetings with Eric Schmidt of Google and Sheryl Sandberg of Facebook.

While both companies are big employers in Ireland, they have also come under international scrutiny over accusations that they have avoided paying tax through elaborate arrangements with Ireland, a charge the Government has persistently rejected.

Mr Schmidt, Ms Sandberg and Microsoft's Satya Nadella will appear at the event later under the heading, "Securing a thriving, open and secure digital economy".

#INFOGRAPHIC The men and women at Davos @AFP pic.twitter.com/oIet9FA4EP 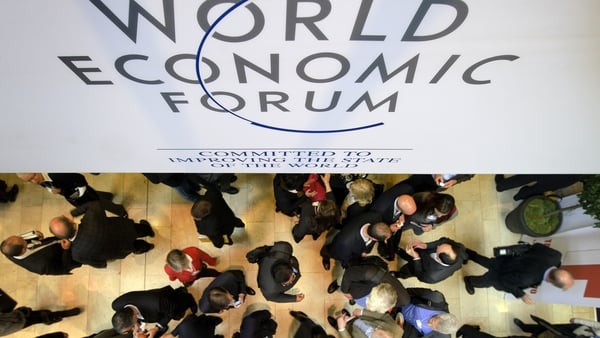