Ireland's bailout programme had a number of flaws which added to the burden on the State's finances, according to Central Bank Governor Patrick Honohan.

Addressing a gathering of Troika members in Dublin Castle, Mr Honohan said he shared the view that the programme was a "significant success" – but that it would be "incorrect to insist on unqualified positivity" about it.

He cited three elements of the programme which he described as "lacking", which reduced the likelihood of it ending successfully.

Mr Honohan said the interest rate on the bailout lending was too high, particularly in light of the debt-to-GDP ratio that existed at the time.

The governor pointed out that the programme had no system for efficiently dealing with bank debt, such as external funding or an insurance scheme, which placed an additional burden on the State.

Mr Honohan also said the programme required a rapid deleveraging of bank assets, which increased the risk of fire sales and in turn increased losses for the country.

Meanwhile, he described the Troika's insistence that no senior bondholders would be burned as a "significant flaw" in the overall programme.

All of these elements increased the risk of Ireland needing a second round of funding from the Troika after the initial programme was complete, he said.

However, Mr Honohan said this risk dissipated as the programme proceeded, not least because some problems turned out to be less severe than first assumed.

The interest rate on the loans was sharply reduced, he pointed out, bank losses were not as great as some had feared and the cost of lenders’ deleveraging was lower than predicted.

Successive governments' decision to stick to budget adjustment targets, as well as their close cooperation with Troika officials, also helped this process, he said.

This resulted in Ireland being able to exit the bailout programme in late 2013 without the need for a precautionary credit line, which he said was welcomed in many quarters.

However, Mr Honohan pointed out that issues still remain within the system, not least around private debt and mortgage arrears.

He said that there had been an assumption that this would be addressed rapidly once banks had been recapitalised but this was not the case.

This could be blamed on banks' optimism that they could recover losses on many loans, though he said they had been making slow progress on the matter more recently.

Minister for Public Expenditure Brendan Howlin said today's gathering of Troika members presented a landmark occasion to reflect on what happened in Ireland.

Senior figures from the Troika, including Managing Director of the International Monetary Fund Christine Lagarde, were in Dublin for the special conference to review Ireland's experience of the international bailout.

Opening the conference at Dublin Castle, Mr Howlin said he wanted to welcome back old friends to the capital although he said he felt a "certain shiver" after all those meetings and years.

He said they dealt with serious issues and they did not always see eye to eye but he liked to think they dealt with issues with civility, mutual respect and the occasional smile.

He said that while progress has been made in the Irish economy, challenges remain both in the financial services sector and the wider economy.

New EU fiscal rules, the open nature of the economy and the high level of Government debt all demanded strict and careful management, he said.

Mr Howlin said even the most optimistic would not have envisaged the level of Ireland's progress in exiting the programme without a funding "backdrop", a decision he said had been vindicated by the high level of growth.

It was also addressed by academics, public servants and private sector analysts from Europe and the United States.

Ms Lagarde met Taoiseach Enda Kenny at Government Buildings earlier, where she said the real heroes in the Irish recovery process are the Irish people and their representatives.

She told the media that it had been a difficult journey with a lot of effort, a lot of sacrifices, and unbelievable determination and cooperation with all parties.

The IMF chief added that stability is of the essence "and one does not want to waste the efforts that have been undertaken so far".

Meanwhile, General Secretary of the Irish Congress of Trade Unions David Begg today described the Troika as "an uncaring brutal technocracy of people who had no regard for the sufferings of the ordinary people of this or any of the other countries in Europe".

Speaking to RTÉ News, he said the lesson he would take from recent years is that Ireland should never again do things that would cause it to fall into the hands of the Troika.

Minister Noonan said the Government was open to talks with unions and employers.

However, he said it would not be a repeat of the Social Partnership model which he described as a "failure".

Minister Howlin added that the problem with Social Partnership in the past was that it excluded involvement with the Oireachtas. 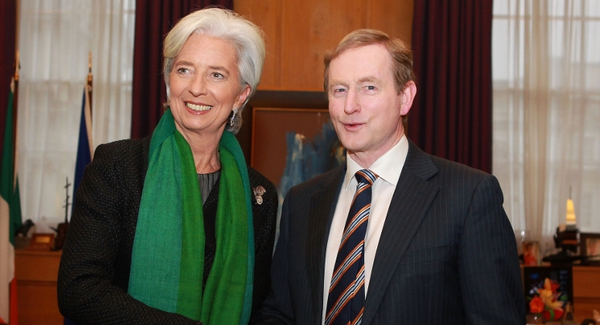