Members of the Irish Nurses and Midwives' Organisation have voted to work-to-rule at Limerick University Hospital, Ennis, Nenagh and Croom on 3 February because of overcrowding.

The ballot resulted in 93% of nurses voting in favour of the action, which will see nurses refusing to perform administrative, clerical or non-clerical tasks.

The action is also in response to a claim for extra nurses for the Limerick University Hospital emergency department and the placing of extra trolleys and beds on inpatient wards.

A Health Service Executive plan to open decommissioned beds in Ennis and Nenagh without any extra nurses or support staff is also an issue for the nurses.

The level of overcrowding in emergency departments and on wards is increasing again with 433 patients waiting today for admission to a bed.

There were a record 601 patients waiting last Tuesday to be admitted to a hospital bed.

The worst-affected hospital today is Beaumont in Dublin, which has 49 patients waiting, of which 44 are on trolleys.

Other hospitals badly affected are Connolly Hospital in Dublin with 35 patients waiting, Letterkenny General with 31 and the Midland Regional in Mullingar and University Hospital Galway, both with 30 patients waiting.

The figures are compiled by the INMO.

Meanwhile, independent TD for Roscommon Denis Naughten has said that the report on Ireland's ambulance service, carried out by consultants for the HSE, is flawed.

He told RTÉ's News At One that the report does not compare like with like, adding that geography should not determine whether you live or die.

The leaked report in the Irish Times says Ireland cannot possibly achieve the targets set down for ambulance response times because of the rural nature of the area covered.

Deputy Naughten said that the key question is what value you put on life. 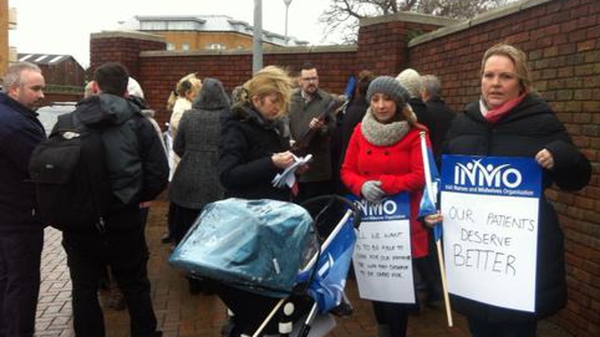