The Health Service Executive has confirmed Liam Woods will be appointed Interim National Director for Acute Hospitals when Dr Tony O'Connell leaves the post at the end of this month.

It is understood Mr Woods' salary will remain at its existing rate.

It is expected Mr Woods will become the new co-chair of the Emergency Department Task Force.

Dr O'Connell announced his intention earlier this week to step down and join his wife in Australia as she takes up an academic post.

It was confirmed earlier that there were 371 patients waiting on trolleys at hospitals.

A HSE spokesperson said there were a number of factors responsible for the reduction in the number of patients waiting on trolleys from a high of 601 on Tuesday.

The most significant factors include the mobilisation and coordination of resources and people nationally and locally, the availability since 1 January of €25m for short-term beds and the deferral of non-urgent surgery.

The Irish Nurses and Midwives' Organisation has said it will not agree to a request by Minister for Health Leo Varadkar to allow two extra beds on every ward as a temporary measure to alleviate overcrowding.

Speaking on RTÉ's Drivetime programme yesterday, Mr Varadkar said a lot of measures that the task force had put in place to deal with overcrowding had not worked.

He said the task force has not met since last month, but was expected to meet this week.

The minister said there was a long-term plan that involved more investment in primary care and social care, but as one short-term measure he asked nurses to allow extra beds to be put on every ward.

However, INMO General Secretary Liam Doran said this would have "no effect on emergency department overcrowding" and would only push the problem "up the house".

Speaking on RTÉ's Morning Ireland, Mr Doran said: "The minister is mistaken if he feels that will alleviate the problem. The reality is that's already happening in a number of hospitals (Limerick and Drogheda).

"But even where it's happening ... it has no effect on emergency department crowding, because it only pushes the problem up the house and does not deal with the fundamentals, which is a lack of bed capacity and an absence of community supports."

Mr Doran said that those wards were already understaffed and the staff there were overworked.

He said: "Every month for the last six months we have been telling the HSE the trolley overcrowding was getting worse.

"Why is it now we are being told that red tape is being stood down in order to find beds for the delayed discharges? Why is it now elective work is being cancelled rather than the ad hoc situation of before?"

He called on the HSE to hold "an aggressive recruitment campaign" to bring nurses back to Ireland to alleviate under-staffing.

Meanwhile, the President of the Irish Hospital Consultants Association has said consultants are already going the extra mile, working well beyond contracted hours.

Dr Gerard Crotty told RTÉ's News At One that the key issue is the lack of capacity both in hospitals and in community services and step-down facilities.

He said that measures taken before Christmas to help alleviate the crisis were too little, too late, adding that trolley figures have been increasing since the summer of last year.

"Consultants are already going the extra mile. We've been working well beyond our contracted hours and consultant physicians have been doing ward rounds twice a day, going down to the emergency department," Dr Crotty said.

Elsewhere, Minister for Children James Reilly has said the current difficulties in emergency departments are just the pinch point of wider problems in the health sector.

However, Mr Reilly said he believes Minister Varadkar will give his full energy to resolving these problems and he fully supports him.

Fianna Fáil leader Micheál Martin said Mr Varadkar was trying to play clever politics with the issue instead of rolling up his sleeves to resolve it.

He also accused the minister of ignoring warnings of a looming crisis in hospitals in recent months.

Sinn Féin President Gerry Adams said that the overcrowding in hospitals was caused by austerity measures put in place by the Government. 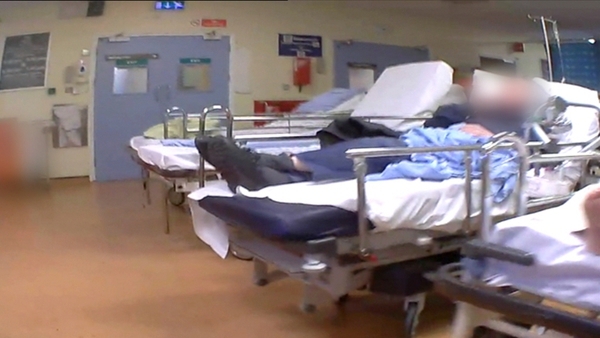