Investigations are under way into the cause of a road crash near Athy in Co Kildare last night in which four young women lost their lives.

The women, who were all college students, were passengers in a car that collided with a van at around 9.45pm.

The 20-year-old driver of the car, also from Carlow, is being treated for serious injuries at Tallaght Hospital.

The crash occurred near Burtown House, Irishtown on the N78 around 9km east of Athy.

Ms Middleton was a second year student of English and Anthropology at Maynooth University.

The university said it was deeply saddened and shocked to learn of her death.

In a statement this evening, it said it is providing counselling services to staff and students.

It said: "Our thoughts are with the families and friends of the four young women so suddenly and sadly taken from us.

"We are mindful also of the three people injured in the accident who remain in hospital, and we hope for their full recovery."

Fr Frank McEvoy, parish priest of Narraghmore, said that the community is numb following the death of the four women.

He told RTÉ's News at One that, it is understood, driving conditions were good, given the time of year. 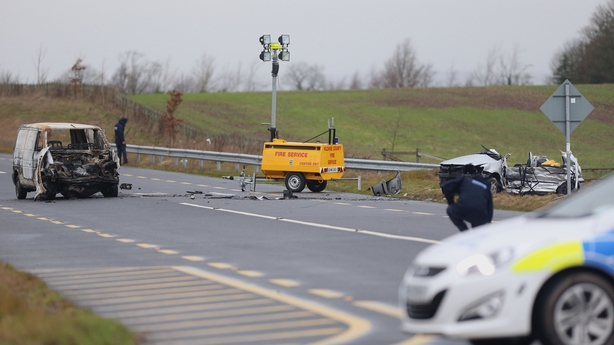 Fr McEvoy, who was at the scene last night, said it was very sad and sombre.

He said: "We had a funeral here this morning and that was the constant talk at the grave; the tragedy that had occurred just down the road from us and the concern for the families who are now left without their loved ones.

"It's horrific, is right, and so young ... and four of them; one foul sweep and that it was it like."

Earlier, Labour Councillor Aoife Breslin, who came across the scene of the crash last night, said the community was deeply shocked and saddened by what had happened.

"The feeling in the community is devastation, if you look on the social media last night there was an awful lot of activity on it, people were coming to terms with what had happened in the area," she said.

"It's a frequently travelled road and everybody's heart goes out to the family and friends of those involved and those injured."

It is understood the car was travelling towards Athy having left the M9 motorway at Junction 3 a few minutes previously.

Gardaí said it collided with a VW Transporter travelling in the opposite direction, which caught fire after the crash. 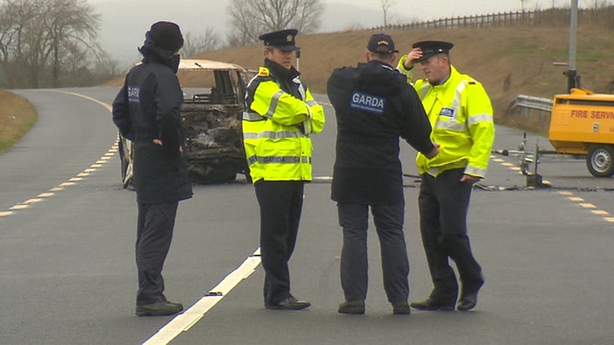 The two men in the van were injured, but they managed to get away from the vehicle before it went on fire.

Both men are being treated at Naas General Hospital.

Gardaí said road conditions at the time were good.

The vehicles involved in last night's fatal accident have been removed from the scene of the collision and the road has now reopened to traffic.