Ireland is to be the first European country to be granted full access for its beef in the US market after the US lifted a ban on European beef imports.

The ban had been in place for almost 16 years, since the BSE crisis in the 1990s.

The announcement represents a multi-million euro boost for the Irish beef industry.

The US Department of Agriculture has insisted that tough audits and inspections of European beef production facilities and systems would have to be passed before the ban was lifted.

Minister for Agriculture Simon Coveney and his department have been working for the past two years to ensure that Ireland would be the first European beef exporter allowed back.

This included hosting two visits to Ireland by the US Secretary for Agriculture Tom Vilsack.

Mr Coveney said today's announcement is a huge prize given the size of the US market and the demand that exists there for premium grass-fed beef.

He said that Ireland will now have first-mover advantage as a result of being the first EU member state to gain entry and that the large Irish-American community will now be a key target for the promotion of Irish beef.

The US decision clears the way for the department to approve individual beef plants in Ireland to export to the US and has already been working with interested parties for some time.

Mr Coveney said he hopes that Ireland would sell at least between €50m and €100m worth of beef to the US this year, but added the industry has scope to go way above that.

Speaking on RTÉ's Morning Ireland, Mr Coveney said Ireland is well ahead of the pack in terms of beef sales to a market that is paying more for beef that any other market in the world. 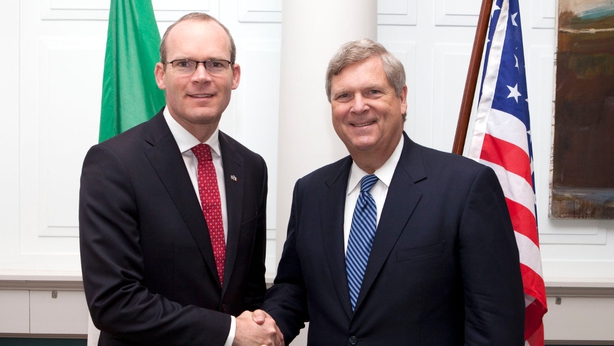 Mr Coveney said for the first time the price of beef in the US is significantly higher than in the EU.

The minister added that Irish beef will be marketed in the niche "green beef" sector in the US, because it is grass-fed and free from hormones.

He said there is very strong demand for this type of beef and currently the US imports much of it from Paraguay.

Mr Coveney also said that he initially believed there would be a niche market supplying the Irish communities in cities such as Boston, New York and Washington, but said he is now looking forward to selling large volumes of beef in the US market.

The Irish Farmers' Association has welcomed the reopening of the US market to Irish beef.

Speaking on the same programme, IFA President Eddie Downey said it was something the sector had been waiting for for a long time.

A spokesperson for Meat Industry Ireland (MII) said clarification is still needed on some aspects, but the decision represents a "further endorsement of our food industry standards and our quality management systems".

MII said it believed the US market will be a "high value/low volume niche market, principally of Irish grass-fed steak cuts", but because of lower than normal beef production in the US there is a chance to potentially export greater volumes over the next year and into 2016 while US herd rebuilding is under way.

The Irish Cattle and Sheep Farmers' Association (ICSA) has given a guarded welcome to the announcement.

ICSA President Patrick Kent said: "This could be a very important development for hard-pressed beef farmers, provided that the meat industry and Bord Bia market Irish beef as a premium product with a view to improving returns to farmers."