More than 270 additional emergency beds have been provided over the past fortnight for people sleeping rough in Dublin.

Minister for the Environment Alan Kelly said it was "a decent start in a short period of time".

He was commenting on the publication of a progress report on the implementation of the Government's Action Plan to Address Homelessness.

It was produced on 9 December following the death of Jonathan Corrie in a doorway near Leinster House.

The Cabinet committed more than €20m to the programme, which also includes a Nite Cafe contact point for homeless people who reject the emergency accommodation that opened eight days ago.

Minister Kelly said a new transport service with additional supports has also become operational, involving an intake team and drivers who work until 3am each morning.

It brings people who are sleeping rough to emergency accommodation where they are cared for.

Recalling that he had promised that every homeless person in Dublin in need of and willing to accept a bed or emergency accommodation would have them before Christmas, Mr Kelly said the progress he was reporting "is some comfort to people sleeping rough on our streets".

He said he was determined to build on it and work towards the Government's goal of ending long-term involuntary homelessness.

In previous official statements, a deadline of 2016 has been set for achieving this objective.

Minister Coffey, who has responsibility for housing in the Department of the Environment, thanked all stakeholders involved in the plan for their hard work.

He reiterated that responding to homelessness requires a collaborative approach from Government, local authorities, State agencies, voluntary services and the public.

Mr Coffey said the long-term solution is to build more houses in both the private and public sectors.

He vowed that this would be achieved by implementing the Government's social housing strategy that was published last month.

Minister Kelly said both men would "continue to push on and deal with the issue of homelessness". 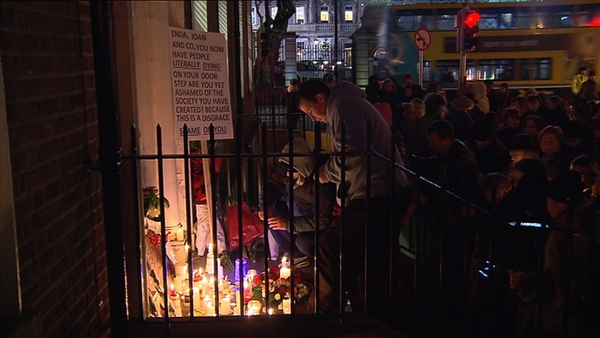 Vigil for homeless man who died on Dublin street