Shareholders at Aer Lingus have voted overwhelmingly in favour of a plan to make a one-off payment of €191m to a new pension scheme.

The move forms part of the proposals to deal with the €750m hole in the existing fund.

Earlier, more than 200 former Aer Lingus workers demonstrated over the pension fund changes outside the extraordinary general meeting of the airline's shareholders.

Con Clarke, chairman of  a group representing retired staff, said the move would result in their pensions being cut by between 10-20%.

Michael Duncan, of the deferred pensions committee, said his members faced a 50% cut.

The joint Aer Lingus/Dublin Airport Authority pension scheme, known as the Irish Aviation Superannuation Scheme, currently has a deficit estimated at around €750m.

Following four years of discussions, Aer Lingus staff have already voted to accept the proposals, which will see the company contribute the €190.7m lump sum to mitigate cuts in benefits for scheme members.

Today some protesters banged on the windows of the room where the meeting was being held.

A number of speakers at the meeting said pensioners have not been consulted and their views had not been taken into account.

Chairman of Aer Lingus Colm Barrington said that the €191m lump sum payment was worth it if they could get the situation resolved and get industrial peace.

He said their big concern was that they had nearly 4,000 employees contributing into a pension fund who by the time they got to retirement age would have been bankrupt.

Mr Barrington said he understood the concerns of those who have retired. But he said he believed they had been pretty well briefed and consulted - something those attending the shareholder meeting rejected.

He said Aer Lingus had done all it could and more to help solve the problem.

He added that he hoped that once this was resolved - which he hoped it would be by year end - the airline would have no further liabilities to any pensioner.

Asked when a new Chief Executive would be appointed, he said that the airline hoped to be in a position to make a decision by the end of the year.

He said that the search had been whittled down to a very short list.

He said he believed the airline could survive, particularly using Dublin as a base. 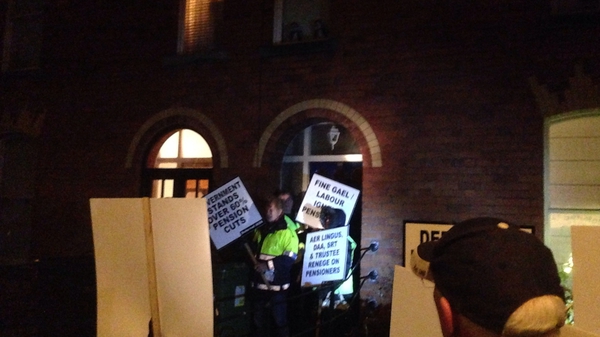