France's last hostage abroad has returned home after three years in captivity and was welcomed by President Francois Hollande, who warned citizens not to travel to high-risk zones.

The release of 50-year-old Serge Lazarevic, who was kidnapped by al-Qaeda's North African wing AQIM in northern Mali in late 2011, was a boost for Mr Hollande, though questions remained over how he was freed.

A beaming Mr Lazarevic met his family and the president on the tarmac of Villacoublay airport near Paris after getting off a flight from Niger.

"Being a hostage is a bit difficult, it's not easy. But life is beautiful, to be freed again," he told a waiting group of TV cameras and reporters.

"I forgot what freedom is, don't ever forget." 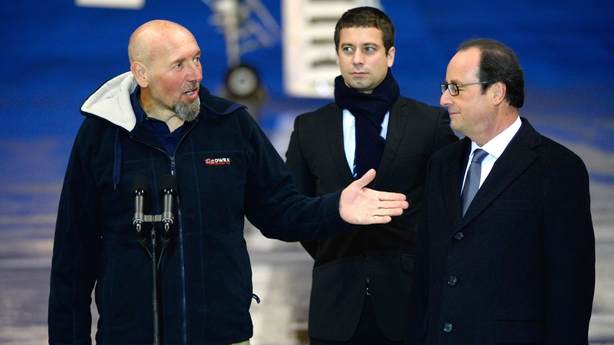 "Be careful because freedom is the most priceless thing."

Mr Lazarevic was released yesterday and Mr Hollande has denied that France paid any ransom.

Both Niger and Mali were involved in the release, said officials, but authorities provided no details of the liberation.

"Welcome, Serge Lazarevic. We've been waiting for you for three years. Three years you've suffered," said Mr Hollande, with the ex-hostage at his side. "You're back. It's a joy to welcome you back."

Mr Hollande mentioned Philippe Verdun, another Frenchman kidnapped alongside Mr Lazarevic who was killed by his captors in northern Mali last year, and warned French citizens to avoid risky zones.

"Make sure you don't go where you can be kidnapped - we're in a dangerous world. There are zones where you shouldn't travel... we know the risks," Mr Hollande said.