A pension deal for former Waterford Crystal workers is being finalised and full details are expected to be known during the week.

It is expected that spouses of those employees who have since died will also get payments.

Much of the discussion on the past year has centred on money being given tax free.

If the deal is signed off by Government, and accepted by the former employees, it is understood to be worth possibly €100m to the local economy.

The old Waterford Crystal closed in 2009 with the loss of around 700 jobs.

However, close to 1,700 former employees were left with nothing when the company and their pension became insolvent.

At least 34 former employees have since died without receiving their entitlements.

Trade union Unite has been fighting to ensure a deal on the pensions was reached, going as far as the European Court of Justice last year, where it won a landmark case.

A deal is due to be recommended following months of intensive discussions and hearings at the Labour Relations Commission, which were chaired by Kieran Mulvey.

A payment of €1,000 per year of service is included in the package, which will not affect social welfare entitlements.

Government sources told RTÉ News that the matter is expected to go to Cabinet on Tuesday.

The agreement is due to be signed-off by the Government on Thursday, which will allow the former employees to vote on the deal.

A mass meeting, which was due to take place today, has been rescheduled for next Saturday in Waterford.

Minster for Jobs Richard Bruton has said he could not comment on the deal in detail.

However, he said a lot of work had been put in to reach an agreement since the European court case and he said that would come to Government in due course. 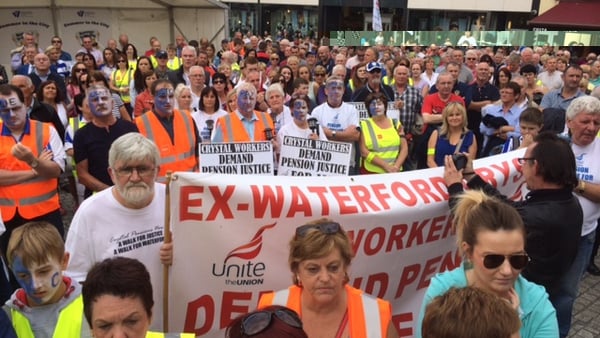