Colleagues have paid tribute to former Independent TD for Kerry South Jackie Healy-Rae, who has died at the age of 83.

He had been ill for some time. He died this afternoon at Kerry General Hospital, in Tralee.

Jackie Healy-Rae was the patriarch of a political dynasty, which includes his son Michael, who succeeded him as a TD for Kerry South, and another son Danny, and a grandson Johnny, who are members of Kerry County Council.

Mr Healy-Rae had four sons and two daughters and his family members were with him when he died this afternoon.

Mr Deenihan, who worked alongside Mr Healy-Rae on Kerry County Council as well as in Dáil Éireann, said: "I got to know him very well over the years and there is no doubt that he was committed to his constituency, and committed to the people he represented."

Fianna Fáil leader Micheál Martin expressed his condolences and said: "I knew Jackie very well and was always very fond of him. He was a unique politician and he captured the imagination of the people of Kerry and across Ireland with his story telling and his sheer determination to improve services in South Kerry.”

"I had the pleasure to work with him in the Dáil for several years on behalf of the people of Kerry."

Mr O'Donoghue added the former Independent TD "was part of an age that could not be understood without him."

Sinn Féin TD for North Kerry Martin Ferris said: "I am sad to hear of the death of Jackie Healy Rae. He was a staunch representative of South Kerry and I send my sympathies at his death to his family and friends in the county and all over Ireland.

"The Healy Rae political dynasty, with the election of his grandson to council, spans three generations.

"He will be sadly missed in the political and social life of the area where he served for decades. Ar dheis Dé go raibh a hanam."

Cathaoirleach of Kerry County Council Cllr John Brassil has also paid tribute to the former Independent TD for Kerry South: "The word legend is often used too often these days, but Jackie definitely was a legend, and a character.

"He had huge intelligence, along with tremendous wit and humour, but he was a man who had a kind word for everyone, and left a lasting impression on everyone he met." 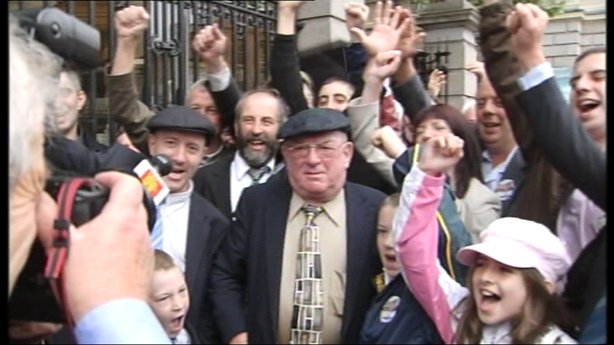 Jackie Healy-Rae was first co-opted to Kerry Co Council in 1973, filling the seat left vacant by the death of Cllr Michael Doherty.

The following year he was elected to Kerry Co Council.

Mr Healy-Rae served on the council until the abolition of the dual mandate saw his son, Danny Healy-Rae, replace him on Kerry Co Council in 2003.

He was elected to Dáil Éireann in 1997 and served the Kerry South constituency until 2011, when he stood down before the 2011 general election, with his son Michael taking a seat in the constituency.