Sinn Féin TD Pearse Doherty has said his party will table a motion of no confidence in Taoiseach Enda Kenny next week.

Mr Doherty said he expected the vote to coincide with next Wednesday's protest against water charges.

Speaking at a press conference organised by the Right2Water campaign, Mr Doherty said Sinn Féin planned to hold the vote because, he said, the Taoiseach had failed to listen to the citizens of the State.

The TD added that Sinn Féin would not consider going into government in the future unless water charges were scrapped.

Meanwhile, Tánaiste Joan Burton has said if a 17-hour debate on the second stage debate of the Water Services Bill proves to be inadequate, further debate can be facilitated.

She was responding to a number of queries during the Order of Business in the Dáil this afternoon, regarding tomorrow's Dáil sitting which will enable deputies to debate the bill further.

A number of opposition TDs voiced concern over the pace of the legislation being put through the House - saying the guillotining of the initial Water Services legislation last December.

Ms Burton pointed out that the Social Welfare Bill was debated in the Dáil yesterday, and "at no stage were there more than five Deputies in the Chamber".

The Tánaiste said "that was a Wednesday, and the people in the Chamber were the party spokespersons on the issue, by and large".

She said if 17 hours of debate on the Water Services Bill is inadequate, the debate will possibly be continued into Saturday and Sunday.

The aim is to vote on the legislation on Tuesday.

Independent TD Clare Daly asked the Dáil if the Government's strategy was to kill opposition of Irish Water by "talking it to death?"

Ms Daly added that people want the Government to listen to what they are saying rather than to talk over their heads.

Socialist TD Paul Murphy said that the most dangerous thing for the Government at the moment is the mass of people realising their own power.

Fergus O'Dowd, the former minister responsible for the initial set-up of Irish Water, sounded a note of caution about the role played by Ervia, formally Bord Gais.

Regarding Ervia's involvement in Irish water, he said Ervia's services should be "opened up to other to other companies" in about a year's time.

Mr O'Dowd said everyone should be able to compete to service Irish Water from then.

The Fine Gael TD made two points - that the company would never be privatised and that board meetings would be solely focused on the business of Irish Water.

Directing his final comments to members of the Technical Group, Mr O'Dowd said the Government had no problems with protests, however he added the role of representatives in the Dáil was to be the voice of people on the streets.

Regarding one opposition TD's claim that there will be a revolution on the streets this Wednesday, he said it was not November 1916 or 1918.

Independent TD Catherine Murphy TD said that more circumstances have yet to come to the fore AND there are major concerns about the awarding of the metering contracts.

She asked why had the Government gone for the more expensive option. Ms Murphy said that there had been changes to the dates for the tendering processes.

She said that GMC Sierra was one of the successful bidders yet it had only come into existence 15 days after the deadline for applications had closed.

She said that these issues would not go away and they were being spoken about in online and social media. She wondered how a company which did not exist got a tax certificate which is required for tenders. 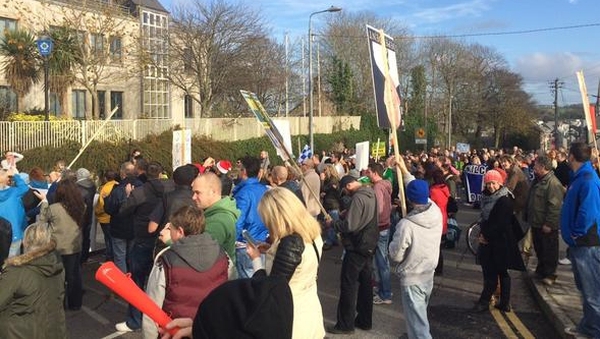