Minister for Health Leo Varadkar has said the Government and the Health Service Executive accepts that there are shortcomings in the country's ambulance service.

Speaking on RTÉ's Prime Time, the minister admitted that Ireland does not have the best ambulance service in the world.

However, he said the country does have a very good one and the service has improved "dramatically" in the past ten years.

A major review of the emergency ambulance service by the Health Information and Quality Authority, published today, was critical of the service, with concerns over an ageing fleet and unsafe staffing levels.

The Government asked for reports from HIQA because it wanted to make a better ambulance service, Mr Varadkar said.

Big changes need to be made, he said, including the introduction of more community response teams across the country.

Asked about the installation of Sat Navs, the minister said they "aren't adequately accurate and cause problems on their own".

He said the introduction of line caller identification and postcodes will make a big difference for ambulances operating in rural Ireland.

A plan will be put in place to address black spot areas of Ireland without an ambulance service, he said.

Minister Varadkar said the Government and the HSE are taking the shortcomings identified in today's HIQA report very seriously.

He said the budget is also being increased by €5.4m next year and the service will be allocated more paramedics.

The HIQA review found that staffing levels in some control centres are unsafe.

It also found that the fleet is ageing and co-operation between the National Ambulance Service and Dublin Fire Brigade is poor.

The ageing profile of the ambulance fleet poses a breakdown risk and the number of emergency ambulances and other response vehicles may need to be expanded, the report adds. 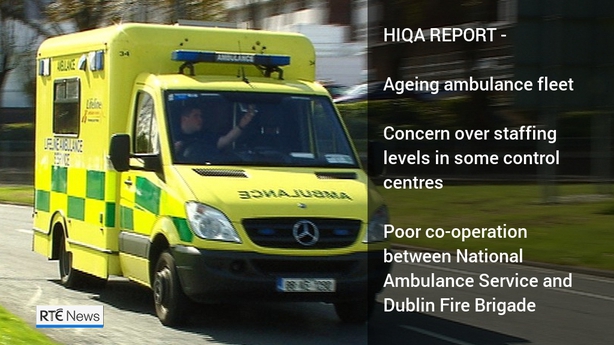 HIQA has also called for its previous recommendation that the call-taker and dispatcher roles be separated must be implemented in all ambulance control centres.

The recommendation arose from a HIQA investigation last year into a case where an emergency call was made to the NAS but an ambulance was not dispatched to the scene and following a sequence of additional events, the patient subsequently died in hospital.

The report also says that nearly all patients who call for an emergency ambulance and agree to travel are brought to an emergency department, when alternatives should be available.

Internationally, over 40% of patients are successfully treated by paramedics without the need to transport patients to hospital.

For other life-threatening emergencies, the best performance in a month was 34% within eight minutes.

The report also calls for better operational efficiency, including address verification, to avoid delays and an increase in advanced paramedic numbers, in both the NAS and the Dublin Fire Brigade, with the latter covering most parts of Dublin.

HIQA says that the NAS and the DFB need to work better together as a matter of urgency.

The report shows variations in the time taken to deal with a 999 call and send assistance.

A survey by HIQA over a 24-hour period found that of 40 cases of life-threatening emergencies relayed to the NAS from the DFB, 11 cases had significant delays of four to eight minutes, due to poor communications between both sides.

The report says that the services provided by both are not integrated and the review found poor levels of co-operation, which is not in the best interests of patients.

The DFB asks the NAS, over the phone, for assistance in responding to calls, but neither has oversight of the other's ambulance resources and organising assistance takes time and this can lead to delays for patients.

Last year, the DFB requested NAS assistance in responding to calls nearly 27,000 times and of these requests the NAS was able to provide assistance for just over 8,000 calls.

The remaining 18,844 calls either received a response from a Dublin Fire Brigade, mobilised from a relatively long distance away from the incident, or where no resource was available, the call had to be queued until a resource became available from either service to respond to a call.

HIQA says that many legacy issues associated with the fragmented nature of the original nine providers remain and the NAS has struggled to fully integrate these into one entity.

The NAS is moving to one national ambulance control centre, located over two sites, each acting as a back-up to the other.

"We are calling on the National Ambulance Service and Dublin Fire Brigade to publish a joint action plan that will outline steps to improve individual and collective performance on all of the matters identified as a result of this review.

"Systems need to be put in place to monitor progress and performance against HIQA's review recommendations", he said.

Responding to the publication, Fianna Fáil health spokesperson Billy Kelleher said he was deeply concerned by some of the findings, especially with regard to the management of the service.

Mr Kelleher said the most disquieting finding is a lack of leadership, strategic planning and constructive cooperation between management and staff in the NAS.

He called on the Government to provide more resources for the ambulance service and the NAS to manage those resources more effectively.

SIPTU members in the National Ambulance Service and Dublin Fire Brigade said the HIQA recommendations were "challenging but achievable".

The health division organiser, Paul Bell, said: "In its 12 recommendations the HIQA review group brings clarity to many of the areas which our members in the National Ambulance Service have identified as a cause for concern over a long period of time.

"It is also evident that the implementation of the recommendations will require a commitment from the Government for additional resources," he added.