Speaking on RTÉ's Morning Ireland, Mr Adams said that the Ceann Comhairle had failed in his duty to ensure that TDs had the right to speak up on behalf of their constituents.

Mr Adams also said he was seeking to meet the Ceann Comhairle.

His comments come after the Dáil was suspended three times yesterday following angry exchanges over Tánaiste Joan Burton's comments on the republican links of an alleged abuser.

Mr Adams pointed out that such rows did not happen in the Seanad or in Stormont, when he had been an MLA.

He denied that Sinn Féin had gone "looking for a row", and said Mary Lou McDonald had just been trying to raise issues about an alleged sex offender on behalf of some of the families involved.

Ms Burton today accused Sinn Féin of pulling stunts on a regular basis and disrupting the operation of the Dáil.

Speaking at a conference in Cork, Ms Burton questioned whether Sinn Féin would walk out on themselves if they were in government.

She said yesterday's Dáil disruption was an outrageous waste of time in relation to a sensitive and important issue about victims of abuse.

The Tánaiste added that Sinn Féin was not interested in government in the Republic and had found a comfortable niche in pulling stunts.

Elsewhere, Taoiseach Enda Kenny has said he intended to meet Mr Adams to discuss Fine Gael's proposals for an inquiry arising out of the allegations made by Belfast woman Máiría Cahill.

Mr Kenny also said he will ask Minister for Justice Frances Fitzgerald to consult her northern counterpart, David Ford, to see if an inquiry into sex abuse allegations could be set up on a 32-county basis with compellability of witnesses on both sides of the border. 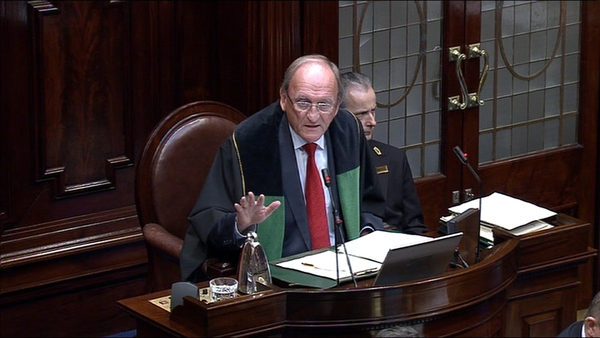