Taoiseach Enda Kenny has written to the US President Barack Obama to commend him for the actions he has taken to reform the immigration system in the United States.

Mr Kenny sent the letter to the White House today.

In it, he appealed to President Obama to make the new option for illegal immigrants to travel back to Ireland and return to the US "as open and flexible as possible".

Mr Kenny said he understood the details of this scheme still had to be finalised.

He wrote: "Your actions demonstrate true leadership, and will transform millions of lives.

"Building on those first steps, I share your ardent hope that Congress may now proceed to enact comprehensive reforms."

The Taoiseach said that Irish Embassy would stay in touch with the White House administration as the arrangements were "fine-tuned".

He concluded the letter by expressing his appreciation for the "humanity and leadership" that Mr Obama had demonstrated with his executive actions.

It described the letter as an "example of the broad and diverse support" for Mr Obama's action.

Meanwhile, a Galway man has introduced Mr Obama on stage as he addressed community leaders in Chicago about immigration reform.

Billy Lawless was one of a small group of ten to 15 community leaders who took part in a round-table meeting with the President to give him feedback on his reforms.

Mr Lawless then introduced Mr Obama on stage at the community centre.

Speaking to RTÉ News earlier, Mr Lawless said it was "an incredible honour" for the Irish to be chosen to play such a significant role in the today's events.

He said he will be telling the President that while the Irish community welcomes his reforms on the one hand, they really want to see more permanent and more thorough change through Congressional action.

He said he will be making the point that limiting the new deferred action programme to just those who have children was unfair.

He will also say that for the illegal Irish, the matter of not being able to travel is a "major, major issue", especially when it came to attending funerals or seeing loved ones who were gravely ill.

He said the current three and ten-year bans on re-entry needed to be waived in these circumstances.

Mr Lawless emigrated to the US with his family in 1998 and is now a US citizen.

He owns a number of bars and restaurants in Chicago and is a co-founder and board member of the Illinois Business Immigration Coalition.

He has been a campaigner for immigration reform for many years.

Mr Lawless is also the vice chair of the Galway-Chicago Sister Cities committee, which hosted a lunch for President Michael D Higgins when he visited Chicago in May. 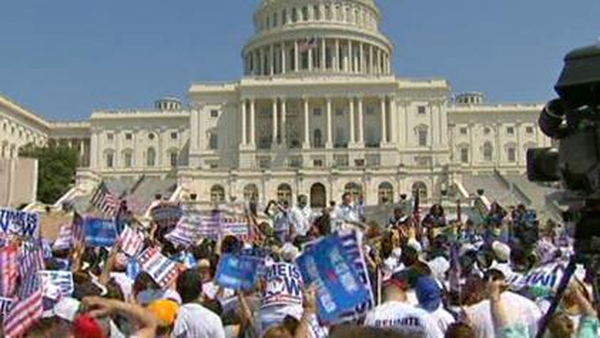 US Immigration reform to protect 5m from deportation