President Barack Obama has defended his decision to bypass Congress and overhaul US immigration policy on his own.

He said he was forced to act because House of Representatives Speaker John Boehner would not let legislation come to a vote.

Mr Obama attempted to rally support for his move in a speech at a Las Vegas high school, saying illegal immigrants need a chance to come out of the shadows.

He engaged in a cross-country debate with a US Republican, who accused Mr Obama  of sabotaging chances for bipartisan legislation and vowed to lead a fight to block his executive actions.

In the summer of 2013, the Democratic-run Senate passed compromise immigration legislation but the bill died in the Republican-controlled House.

Mr Obama said he waited to see if the house would ever pass the legislation, but US Republican Boehner would not let it come to a vote.

To those politicians who feel he overstepped his constitutional authority, Mr Obama said his message to them is: "Pass the bill."

Mr Obama's move threatens to herald a new round of partisan gridlock in Washington as Republicans who will control both chambers of Congress in January react with scorn to his decision.

Republicans remain split on the best course of resistance to Obama's action easing the threat of deportation for some 4.7m undocumented immigrants.

Conservative groups were already pulling together legal strategies to challenge it.

Mr Obama received a rousing welcome from a largely Latino audience at Del Sol High School in Las Vegas, the same place he visited just after beginning his second term in 2013, when he laid out his principles for immigration reform.

A heckler shouted at Obama that his order did not go far enough. Mr Obama engaged him from across the high school gym.

Outside, a couple of dozen protesters who opposed his actions shouted slogans and held up signs that said: "Stop Obama Amnesty."

Before getting off Air Force One shortly after landing in Las Vegas, Mr Obama signed two presidential memoranda to set in motion part of the biggest US immigration changes in a decade.

Republicans have said in recent weeks they would consider adding a challenge to the Obama immigration order to the healthcare lawsuit.

But the most prominent strategy under consideration,supported by many conservatives in Congress, is to withhold funds for implementation of the immigration order from a major spending bill needed to fund the government by 11 December.

A fight over the spending bill could lead to another shutdown of federal agencies, one year after a 16-day closure that inflicted heavy political damage on Republicans.

"We do need to find a way to really push back," Republican Senator Jeff Sessions of Alabama, who has called for using the spending bill as a vehicle to challenge the order, said at the Heritage Foundation.

Other Republicans have suggested a range of options, from opposing all of Obama's nominees unless he relents, to stand-alone legislation undoing the order and even impeachment.

Defying his Republican Party rivals, Mr Obama announced that he would offer up to five million undocumented migrants protection from deportation.

The controversial overhaul provides three-year relief for those who have lived in the United States for more than five years and have children who are US citizens or legal residents.

The order will affect about 44% of more than 11 million people -- mostly from Mexico and Central America -- living in the United States illegally.

Minister for Foreign Affairs Charlie Flanagan has welcomed the announcement by Mr Obama.

Speaking on RTÉ's Morning Ireland, Mr Flanagan said Mr Obama did not announce the detail as far as travel is concerned, but said there is reference to it.

"It is clear, from what has been said, that the travel issue will be addressed and will allow for many Irish to travel in a manner in which they haven’t over the years, to attend funerals, to attend weddings, to come home, where there is a real humanitarian need."

Mexican and Central American officials said they would provide information about the programme to their citizens through their consulates in the United States.

El Salvador's foreign minister, Hugo Martinez, voiced "the satisfaction of President Salvador Sanchez Ceren's administration because many of our compatriots will have temporary relief regarding their migratory situation."

The Honduran government said the move was "a great step in the right direction by the United States to resolve the migratory problem of 11 million people."

Enforcement officials will only deport those convicted of serious criminal offences, rather than those who have been arrested for minor offences.

Perhaps most significantly, there will be what is described as a relaxation of the re-entry ban imposed on illegal immigrants who leave the US to return to their home countries.

Once they obtain advance permission, those with temporary status will be allowed to come and go for reasons of personal hardship.

The changes are expected to begin to take force from early next year.

Instagram of President Obama in the East Room where he will deliver his Address to the Nation on immigration at 8pm. pic.twitter.com/KQbnRJiHBN

The Republican Speaker of the House of Representatives John Boehner said that President Obama's executive action has sabotaged chances for bipartisan legislation.

He indicated Mr Obama's decision to use his executive authority and bypass the US Congress, where immigration legislation has stalled, could taint future efforts.

"All year long I have warned the president that by ...threatening action repeatedly on immigration, he was making it impossible to build the trust necessary to work together," Mr Boehner told reporters.

"With this action, the president has chosen to deliberately sabotage any chance of ... bipartisan reform that he claims to seek." 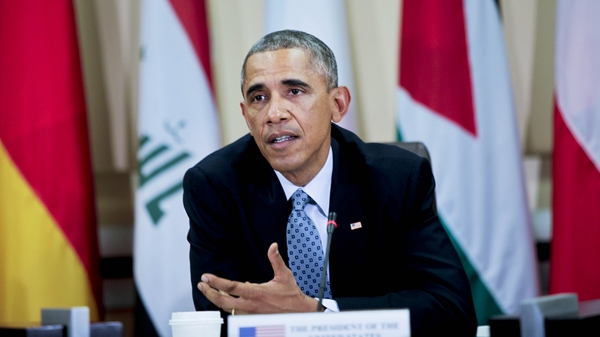