Israeli forces demolished the east Jerusalem home of a Palestinian who killed two Israelis with his car last month as it speeded up the application of a controversial demolition policy.

"The home of the terrorist, who killed an Israeli baby and a young woman on October 22 in a tram station in Jerusalem, was destroyed in Silwan," an army statement said.

The demolition came after Prime Minister Benjamin Netanyahu vowed a harsh response to a deadly attack on a Jerusalem synagogue yesterday, the city's bloodiest in year.

Two Palestinians armed with a gun and meat cleavers killed four worshippers and a policeman.

Mr Netanyahu pledged to speed up demolitions of homes of perpetrators of attacks in Jerusalem in line with a policy announced earlier this month.

"This evening, I ordered the destruction of the homes of the Palestinians who carried out this massacre and to speed up the demolitions of those who carried out previous attacks," he said.

Home demolitions have long been used as a deterrent punishment in the occupied West Bank but it is the first time that they have been adopted as a matter of policy in annexed Arab east Jerusalem.

The practice is condemned by human rights watchdogs as collective punishment that targets not perpetrators of attacks but their families.

"Punishing the families of suspects by destroying their homes is collective punishment and is prohibited by international law," Amnesty International said yesterday.

"Authorities must not trample over the rights of Palestinians through collective punishments and other heavy-handed measures in order to restore security," said the watchdog's Middle East and North Africa director Philip Luther.

The Palestinian whose home was destroyed, Abdelrahman Shaludi, was shot dead by police after his car rampage as he attempted to flee on foot.

The three-month-old baby he killed, Haya Zissel Braun, also had US citizenship.

Karen Mosquera, 22, of Ecuador, died later of her injuries. 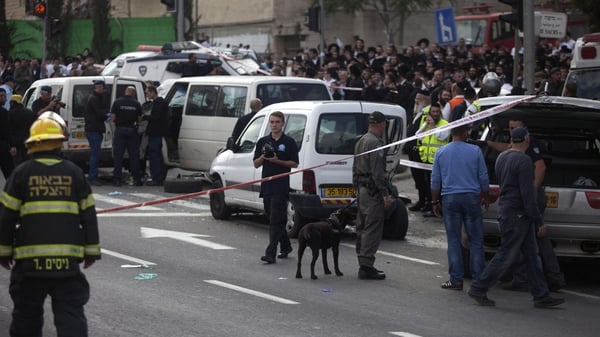