A doctor from Sierra Leone who was being treated at a US hospital for Ebola has died, the Nebraska Medical Center has said.

"We are extremely sorry to announce that the third patient we've cared for with the Ebola virus, Dr Martin Salia, has passed away as a result of the advanced symptoms of the disease," the hospital said in a statement.

It comes as the US added Mali to the list of countries whose travellers get special Ebola screening after a number of cases in the west African nation.

Enhanced screening started today for the 15 to 20 travellers who arrive daily from Mali, the US Centers for Disease Control and Prevention and the Department of Homeland Security said in a statement.

Mali has placed more than 440 people who may have been exposed to Ebola under surveillance as it battles to contain the spread of the deadly tropical virus.

The west African nation has been scrambling to prevent a minor outbreak turning into a major crisis after the deaths of a Guinean imam and the Malian nurse who treated him in the capital Bamako.

A friend who had visited the imam in the Pasteur clinic also died of probable Ebola and a two-year-old child died in an unconnected case in the western town of Kayes in October.

Samba Sow, of the Ebola emergency operations centre, said in a statement that 442 people have been placed under observation.

"The death toll has not changed since November 15, and remains three related to (and including) the Guinean patient's death and one death in Kayes," Mr Sow added.

He said a doctor who contracted the virus at the Pasteur clinic was "being treated by specialised services".

A government official said on Friday two people who died after exposure to the body of the imam were also "highly suspected" of having contracted the virus.

They are not confirmed cases, however, and have not been counted among the official statistics.

The WHO announced on Friday that the outbreak, almost entirely confined to west Africa, had left 5,177 people dead from around 14,500 cases since Ebola emerged in Guinea in December.

Meanwhile, the United Nations envoy charged with leading the response to the Ebola crisis in Guinea died, just a month after taking on the role, the organisation said.

Rwandan national Marcel Rudasingwa 59, "died suddenly", Aissata Cisse Yao Yao, of the UN Development Programme, said in a statement which did not reveal the cause. 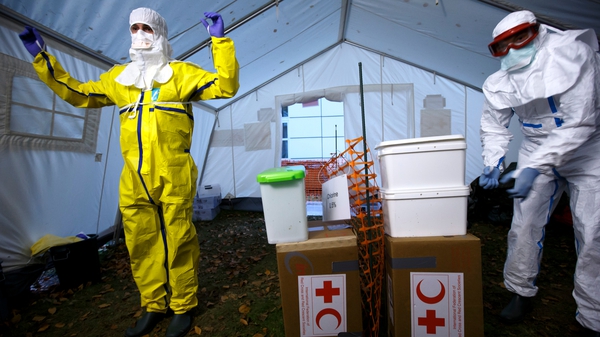