US President Barack Obama has rejected any alliance with Bashar al-Assad against the Islamic State group, arguing that the Syrian ruler was illegitimate and that any such pact would backfire.

"Assad has ruthlessly murdered hundreds of thousands of his citizens.

"As a consequence, he has completely lost legitimacy with the majority of the country," Mr Obama told reporters after a G20 summit in Brisbane.

"For us to then make common cause with him against ISIL [an alternative name for the Islamic State group] would only turn more Sunnis in Syria in the direction of supporting ISIL and would weaken our coalition," he said.

US reports this week said the president had ordered a wholesale review of his administration's Syria policy, with Mr Assad still in power despite an armed uprising that is now in its fourth year.

The conflict has become many-sided as jihadists gain ground, notably the Islamic State group and the Al-Nusra Front, which is affiliated to Al-Qaeda.

Mr Obama has built an international coalition against IS as it rampages across both Syria and Iraq.

The coalition in September launched its first air strikes against the militants, using Syrian air space, and Mr Obama is deploying up to 1,500 more US troops to Iraq.

The president denied that he intended to recalibrate his Syria policy, insisting that it was reviewed all the time to see what was working and what was not.

"Certainly no changes have taken place with respect to our attitude towards Assad," he said in Brisbane.

"This is a fight against extremisms of any stripe that are willing to behead innocent people or mow down political prisoners with a cruelty that we've very rarely seen in the modern age," he added.

Mr Obama said that communication with the Assad regime was limited to informing them that if the US uses Syrian air space in anti-IS operations "they would be well advised not to take us on".

"But beyond that, there's no expectation that we are going to in some ways enter an alliance with Assad," Mr Obama said.

"He is not credible in that country." 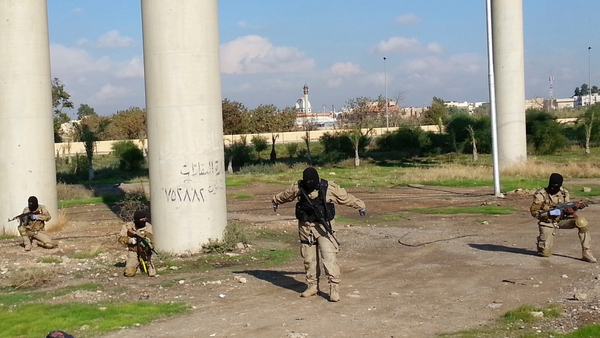 Syrian raids on IS 'kill 21 civilians'