A former director and shareholder of Shelbourne College has told RTÉ News she does not know whether the college will close or not.

Catherine Laffey was commenting following revelations last Thursday that large debts are owed by the college to dozens of students in developing countries.

Ms Laffey said she resigned her directorship and 30% shareholding in the company on 17 October, although her resignation had not yet been processed.

She said this afternoon that she had agreed to become a director and shareholder of Shelbourne College last June because it was a "good business opportunity".

She said she did not examine the college's books and was unaware of tens of thousands of euro owed to students in India, Nepal and other developing countries.

Ms Laffey said she accepted that she had corporate responsibility, and had resigned when agents in India began to complain that their students were not getting fees refunds owed to them.

She said she was now the only person taking responsibility and that she was in the college to try and help students and staff.

She said she was only ever an owner of the college "on paper" but had nothing to do with the finances of the college, that her job was to administer the college and had been promised a salary and "more down the line".

A number of students had paid fees of more than €4,000 each to the college prior to applying for entry visas, as they are legally obliged to do.

Colleges are required to hold this money and return it if the visa application is unsuccessful.

However Shelbourne College has failed to refund dozens of students.

Several students said today that they cannot bring themselves to tell their parents what has happened.

One student said his father, a small farmer, had borrowed the money to pay the cost of his studies and was paying high interest on it.

One employee of Shelbourne College, Christine Dunne-Bazigou said she had no idea of what had been going on.

Ms Dunne-Bazigou, who oversaw academic studies at Shelbourne said she felt sick to her stomach at the idea of people in developing countries being left in this situation.

She said she could no longer associate herself with Shelbourne College.

Teachers and staff at the college, and RTÉ News, have attempted since Thursday to contact Director Adnaan Walah but have been unable to do so.

A meeting of staff was due to take place this morning, but staff received an email from the college postponing the meeting indefinitely.

The unsigned email, from the college's email address also stated that the "current situation" at the college required "a financial injection and a bail out and we are in the middle of certain meetings with our financial analysts and investment companies including our friends ... to help deal with the current financial crunch".

It said staff would be contacted as soon as the college was "done with the said task". 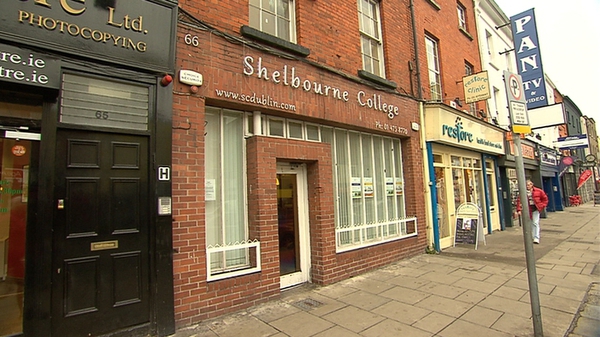