A Belfast solicitor representing two women who claim they were sexually abused by a republican has said that his clients have been contacted and would be willing and eager, subject to the terms of reference, to take part in the independent review into Máiría Cahill's case.

Kieron Mulholland said: "Our clients would be willing, subject to understanding the terms of reference of this review and how it would work, would be eager to take part in the matter to ensure that their version of events could be aired."

He also said that his clients' case became a political issue.

Mr Mulholland said that the women withdrew criminal proceedings against their alleged abuser because a case involving the man's alleged membership of the IRA was taking precedence over his clients' case.

Yesterday, in a statement, the women, who are in their 30s and who wish to remain anonymous, also said that there were undue delays in prosecuting their claims because they got caught up in the legal procedures linked to Ms Cahill's allegations.

Mr Mulholland told RTÉ's News At One that during the criminal stages of his clients' case, they were never made aware of any other case against their alleged abuser.

He said: "This case all emanated as a result of an allegation of sexual abuse and rape against several individuals from west Belfast.

Meanwhile, Sinn Féin leader Gerry Adams has said there is no possibility of him resigning over allegations that Republicans allowed abusers within their ranks to roam free and abuse with impunity.

Speaking on RTÉ's Morning Ireland, Mr Adams said he had a responsibility to those who elected him.

He said he had at all times acted properly and with propriety.

Mr Adams said: "There is no possibility of me resigning on this issue. I have a responsibility to those who elected me. I have a mandate. I behaved at all times properly and within propriety and will continue to do so.

"But any suggestion or innuendo or assertion that I or the party, which I am very proud to be a part of, was involved in any cover up whatsoever is wrong."

Mr Adams also said he did not know if Ms Cahill was brought face-to-face with her alleged abuser by IRA members.

Ms Cahill has claimed she was raped as a teenager in 1997 by a member of the IRA and later interrogated by the organisation.

Mr Adams said anyone who comes forward with allegations of sexual abuse should be supported.

The Sinn Féin leader said he did not know where the IRA expelled sex offenders to and repeated that the organisation was ill-equipped to deal with these offences.

He said he took grave exception to what Taoiseach Enda Kenny, Fianna Fáil leader Micheál Martin and others have been saying about the issue.

Mr Adams said they had been making scurrilous and inaccurate remarks in an attempt to smear him and Sinn Féin.

He said they had implied that offenders had been moved to Louth, Donegal and Dublin and said if they had this information they should bring it to the gardaí.

Mr Adams called for an all-Ireland approach to dealing with the problem of sexual abuse. 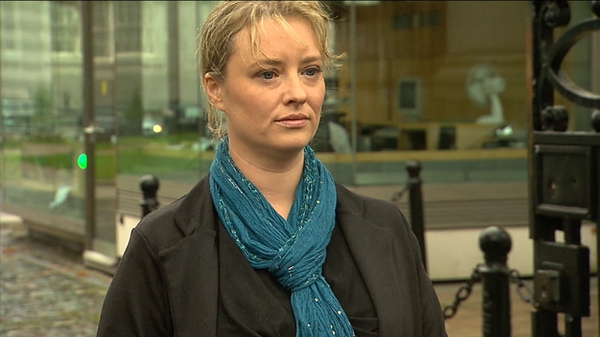