The death toll from the Ebola epidemic rose to 4,922 out of 10,141 known cases in eight countries up to Friday, the World Health Organization said today.

The virus, which reached Mali through a two-year-old girl who died on Friday, now threatens Ivory Coast, having infected people virtually all along its borders with Guinea and Liberia.

The three worst-hit countries of West Africa - Guinea, Liberia and Sierra Leone - account for the bulk of the world's worst Ebola outbreak.

The overall figures include outbreaks in Nigeria and Senegal, deemed by the WHO to be now over, as well as isolated cases in Spain, the United States and a single case in Mali.

But the true toll may be three times as much while the death rate is thought to be about 70 percent of all cases.

The WHO has said that many families are keeping infected people at home.

This is rather than putting them into isolation in treatment centres, some of which have refused patients due to a lack of beds and basic supplies.

The UN agency, sounding an ominous note, said that out of the eight districts of Liberia and Guinea sharing a border with Ivory Coast, only two have yet to report confirmed or probable Ebola cases.

It has also said trials of Ebola vaccines could begin in West Africa in December.

This is a month earlier than expected, and hundreds of thousands of doses should be available for use by the middle of next year.

The WHO says 15 African states including Ivory Coast are at highest risk of the deadly virus being imported.

In the last 10 days it sent teams to both priority Mali and Ivory Coast to help national authorities gear up their capacity to detect and treat potential cases.

Four WHO experts are travelling this weekend to Mali to reinforce the team there.

The agency warned yesterday that many people in Mali had potentially been exposed to the virus because the little girl was taken across the country while ill.

43 people with whom she was in contact, including 10 healthcare workers, are being monitored for symptoms that include fever.

In all, 450 health care workers have been infected to date - including one in Spain and three in the United States - leading to the death of 244 of them, the WHO said.

A medical worker quarantined in New Jersey on her return from treating Ebola victims in West Africa was being evaluated in a hospital isolation ward today.

Isolation wards have been used for medical personnel returning from Ebola zones since Craig Spencer, a doctor who treated patients in Guinea for a month, came back to New York City infected.

Mauritania closes its border with Mali

Elsewhere, Mauritania has closed its border with Mali after a case of Ebola was confirmed in western Mali near their shared frontier.

Chief medical officer in Kobenni Limame Ould Deddeh, a town in eastern Mauritania near the Mali frontier, said the government in Nouakchott had sent orders to close all land crossings.

President Ibrahim Boubacar Keita of Mali had earlier his country would not shut its border with Guinea.

This is even though the Ebola case in Mali was a girl who brought the disease in from Guinea, which has been battling the disease for months. 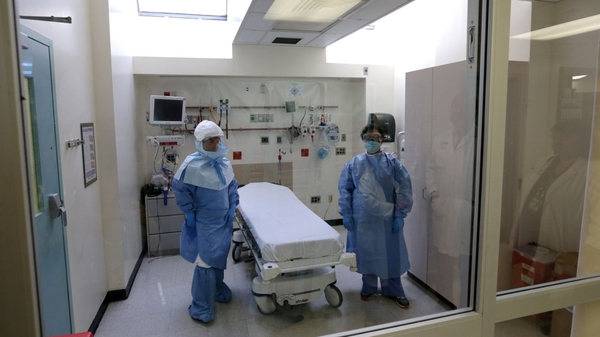