The Ceann Comhairle has responded to the legal advice received by members of the Technical Group, which questions the inclusion of TD's Lucinda Creighton and Peter Mathews to the Group.

In a statement, Sean Barrett said the Technical Group is no more than a technical mechanism that has existed for decades in the rules of the Dáil.

Essentially, he said, it is a speaking rights mechanism and should not be confused with a political party.

He said he has advocated on several occasions that it is a fundamental right of all democratically elected members to speak in the House.

Mr Barrett said he is extremely mindful of his obligation to uphold the rights and privileges of all members, in accordance with the constitution and the standing orders of Dáil Éireann.

To suggest otherwise, he said “is simply wrong”.

He said the criteria is set out in standing order 120 and must inform the Ceann Comhairle that they have joined a Technical Group automatically becomes a member of that group.

He says the advice received by certain members of the Technical Group now confirms what the Houses of the Oireachtas Service has been telling them all along, namely that a member who has severed all links with his/her party is eligible to join the group.

Mr Barrett said it should also be noted that nowhere in Standing Orders does it say that a Technical Group can exclude a member who wishes to join.

He added that if that were the case there could be a situation where the majority of non-aligned members could oppress the rights of the minority.

That alone would breach the principle of equal participation in the workings of the National Parliament, according to Mr Barrett.

Earlier, it emerged that legal advice to the Technical Group regarding the admittance of two former Fine Gael TDs has found that membership can only be granted by agreement of the group.

There were dramatic scenes in the Dáil this week when three Independent TDs were suspended from the chamber.

They were suspended for challenging Ceann Comhairle Sean Barrett on his decision to allow Lucinda Creighton and Peter Mathews speaking time in the Technical Group.

Having lost the Fine Gael party whip, both Ms Creighton and Mr Mathews requested to join the Technical Group, which consists of Independent TDs and smaller parties.

Mr Barrett issued letters on Wednesday morning, saying he would, at his discretion, call on members of the Reform Alliance to speak in time allocated to the Technical Group.

The legal advice issued was if the group does not agree to an unaligned TD joining it, then according to Standing Orders, that TD is not permitted to join the group.

It also said there appears to be "invidious discrimination" that forcing a group to associate on an involuntary basis is at variance with the right to associate freely under the Constitution. 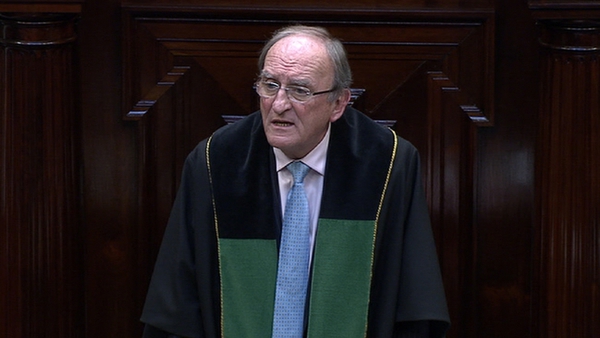