Senior staff at Irish Water and its parent company Bord Gáis now called Ervia, may earn annual bonuses payments of up to 19% as part of their controversial "reward" scheme.

The performance awards are not limited to those who meet or exceed targets, but also include staff who get an official "need improvement" rating, according to details of the scheme obtained by RTÉ's This Week.

Fianna Fáil leader Michaél Martin said he was "appalled" at details of the pay awards.

He said they would anger people and undermine the Government's plan to establish Irish Water.

All staff across both companies, excluding CEO and directors reporting to the chief executive, who get a "need improvement" rating can earn an additional bonus at the end of their annual performance review period.

Higher ranking managerial levels such as business leaders and managers who earn a "need improvement" rating stand to earn an additional 9% payment alongside their mid-€90,000 salaries.

Lower paid administrative or technical staff, who are paid salaries of up to the mid-€40,000 bracket and who get a "need improvement" rating are entitled to a bonus of 1.5% annually.

Performance awards for staff who get a "need improvement" is just one feature of a new "reward model" which was implemented in Bord Gáis last year.

The only workers at both companies below CEO and director level who do not receive a performance award are those who fail to achieve expectations.

Bord Gáis, which recently changed its name to Ervia, has confirmed that all 500 staff below CEO and director grade now working for its subsidiary Irish Water benefit from the same performance awards system.

However, Irish Water is a new company and no actual performance awards have yet been paid out to staff.

The performance awards are based on individual performance, as well as how the employee's business unit performs and overall company performance.

Staff who meet all expectations, but who do not exceed this, can earn bonus payments of up to 14% annually, in the case of senior managers; or 6.5% in the case of middle-ranking employees, and 2.75%  for lower paid grades.

A spokeswoman for Ervia confirmed the details of the performance awards.

She told RTÉ that these performance related awards were not like traditional bonus payments, but were an element of actual salary which is placed "at risk" if performance targets are not achieved.

Bord Gáis said that the performance-related awards were introduced after agreement with staff unions and that the new rewards structure led to pay-related savings of €34m over four years, with average pay reduced 2.1% from what it was during 2012 and 2013.

The company reiterated the view that it had effectively replaced the system of "fixed pay" with and replaced it with a situation where there was now an "element of pay at risk, driven by performance".

The pay model and other HR practices at Ervia have been established to reinforce a performance driven organisation culture, consistent with best practice for commercial utilities.

A spokesman for the Department of Environment said they had referred to the performance related awards scheme when asked under parliamentary question in the Dáil, as well as outlining the numbers of certain salary grades who could benefit from awards under the scheme.

Meanwhile, Minister of State at the Department of Finance, Simon Harris has denied reports that the Government is planning to restructure Irish Water management.

He said a review of the Board is due to be carried out in November.

However, Mr Harris said it is fair to ask if the job of managing Irish Water is being done correctly.

Minister for Foreign Affairs Charlie Flanagan, has said there are "real and serious issues" regarding the structure of Irish Water, the manner in which the company was set up, and its communications strategy.

Asked if he had confidence in the management of the utility, Mr Flanagan said he hoped Irish Water could ensure it would be able to deliver a service to the public, and deal with the "many outstanding queries that are currently an issue" for the company. 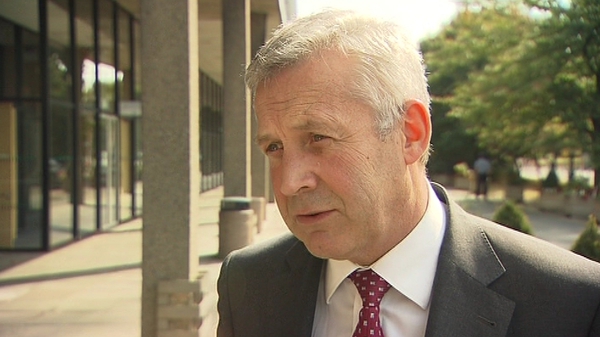