Aid workers returning to Ireland from areas in west Africa affected by the Ebola virus are being monitored, an Oireachtas committee has heard.

Dr Darina O'Flanagan of the Health Service Executive's Health Protection Surveillance Centre told the Joint Committee on Health and Children that much depended on the risk of exposure they encountered abroad.

She said those with high risk have active monitoring each day, while those regarded as low risk will undergo self-monitoring.

Ebola has killed nearly 4,500 people, the vast majority of them in west Africa, where the outbreak began early this year.

Earlier, Minister for Health Leo Varadkar said Ireland needs to step-up its preparedness for Ebola, in particular with dry-runs and provision of equipment.

Mr Varadkar told the committee there was no reason to believe emergency departments in Ireland will be swamped or services overwhelmed by people infected with Ebola.

He said with appropriate infection control, the risk of transmission of Ebola in Ireland is considered very low.

The minister said should a case occur, it is likely that there will be only one or two cases and they can be handled in the National Isolation Unit in the Mater Hospital in Dublin.

He said the HSE has distributed personal protective equipment packs to GP practices and out-of-hours services.

He said many doctors will have these anyway from previous threats. Doctors that do not have the material are being asked to contact the HSE.

Some hospitals have already performed 'dry-runs' but all will be required to do so, Mr Varadkar said.

The HSE's Health Protection Surveillance Centre has issued guidance to hospitals and GPs, including an algorithm for the assessment of cases, he told the committee.

The minister said regarding airport screening, the best advice is that it is far more effective to have exit screening in affected countries.

Chief Medical Officer Dr Tony Holohan told the committee there have been 14 incidents in Ireland that resulted in 23 tests for Ebola being carried out.

Only one of these could have possibly been Ebola and it was not.

Speaking later on RTÉ's News at One, Dr Holohan said if people are concerned they are experiencing symptoms of Ebola they should contact their GP and based on the information given they will identify whether the patient is at risk.

He said health professionals in emergency units have the relevant expertise to decide whether a patient is high risk and that the information being given to healthcare workers, along with personal protective equipment, is adequate.

The HSE's Health Protection Surveillance Centre said it had  issued guidance to hospitals and GPs for the assessment of cases.

Senator John Crown said he has been reassured about Ireland's ability to deal with a possible Ebola outbreak.

He said it was alarming that healthcare workers in Spain and Texas had become infected after caring for Ebola patients and this was one of the reasons why he had called for a briefing of the Oireachtas Health Committee.

"There had been rather little public information about this, but I must say I'm generally reassured following this morning's hearing and Minister Varadkar and Dr (Tony) Holohan's briefing," he said.

Prof Crown said he still had some questions as to whether the protocols the HSE were using were the most up-to-date and whether the 12-bed isolation unit in the Mater Hospital would be adequately staffed to implement the "buddy care" system, where healthcare workers had to work in pairs to ensure all protocols were followed.

He said it was still a bit vague as to what the advice was for patients who thought they might have Ebola symptoms and that some people might think that to "contact" their GP meant going to a surgery.

He also said it was not spelled out what exact steps a GP should take if there was a suspicion that a case might be Ebola-related.

Prof Crown said no assurance was given of the availability of isolation units in hospitals outside of Dublin, but the committee members were told that protocols were in place for handling potentially infected patients.

Threat of Ebola needs to be 'taken seriously'

The Irish Medical Organisation has raised concerns with the HSE over its contingency plans in the event of an Ebola case in Ireland.

IMO President Professor Trevor Duffy said it was not enough for everyone in health services to say they were up to the task of dealing with Ebola.

Speaking on RTÉ's Morning Ireland, he said they needed to show they were well-prepared to respond effectively to any threat.

Prof Duffy also said the threat of the spread of Ebola to Ireland needed to be taken seriously and was made much more real by the emergence of cases in Spain and Germany.

The HSE has said it is not advising patients displaying Ebola symptoms to visit their GP, but said they should contact their doctor.

The General Secretary of the Irish Nurses and Midwives Organisation has said more work needs to be done to ensure that healthcare staff are properly equipped to deal with the threat.

Speaking on RTÉ's Today with Sean O'Rourke, Liam Doran said many INMO members are not up to speed on the protocols and best practice associated with treating an Ebola patient, adding that this is something that needs to be rectified.

Opposition politicians have questioned the decision not to begin screening passengers for Ebola at airports, even though other countries including the UK have seen it as a necessary precaution.

Dr Fry said although it is unlikely screening would detect cases of the virus, the fact that screening is taking place would raise awareness of the virus.

France will start carrying out health checks on Saturday on travellers arriving by plane from Guinea, one of the worst-hit nations in the spreading Ebola epidemic. 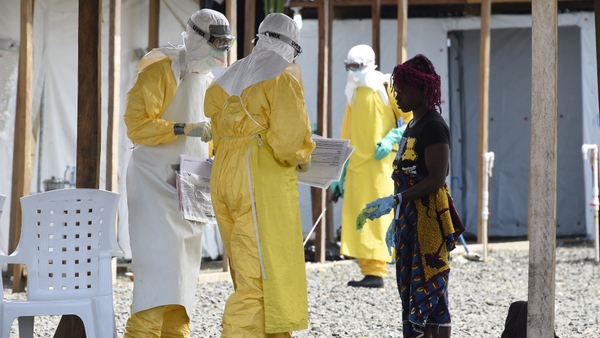