At least 10 Syrian soldiers and 17 civilians have been killed in the latest round of air strikes in Syria.

10 Syrian soldiers were killed in clashes with Islamic State group jihadists in the eastern province of Deir Ezzor earlier today.

The Britain-based Syrian Observatory for Human Rights said the clashes took place not far from Deir Ezzor military airport, a key remaining post for the Syrian army in the oil-rich province.

The Islamic State controls the majority of the province, but parts of the provincial capital, Deir Ezzor city, are still under government control, along with the airport.

Elsewhere in Syria, the Observatory reported at least 12 people killed in Syrian regime air strikes on the Ain Tarma area outside the capital Damascus.

Among the dead were three children, the Observatory said.

The Syrian Observatory for Human Rights said this figure is likely to rise.

Meanwhile, military leaders from the 22 countries in the US-led coalition against the Islamic State group are to meet US President Barack Obama in Washington today.

They will discuss ways to halt the jihadist group's relentless advance in Iraq and Syria.

It is the first time such high-ranking military officials from so many countries have come together since the US-led coalition was formed in September.

President Obama will hash out a strategy to counter IS with military leaders including Turkey and Saudi Arabia amid growing pressure for the coalition to do more to stop the militants' advance.

President Obama will attend a meeting led by General Martin Dempsey, chairman of the Joint Chiefs of Staff, with foreign defence chiefs at Andrews Air Force Base outside Washington to discuss the coalition's work.

"It is part of ongoing efforts to build the coalition and integrate the capabilities of each country into the broader strategy," said Alistair Baskey, spokesman for the White House National Security Council.

The strategy, however, is being called into question. Republican US Senator John McCain, a frequent Obama critic, said on Sunday that "they're winning and we're not," referring to IS militants.

The United Nations said yesterday that fighting in Iraq's western Anbar province had forced up to 180,000 people to flee after IS captured the city of Hit.

"This is a long campaign. It hasn't gone badly, but it certainly hasn't gone well," said Anthony Cordesman, national security analyst at the Centre for Strategic and International Studies.

Colonel Ed Thomas, Mr Dempsey's spokesman, said no major policy decisions were expected at the meeting, adding: "It's about coming together in person to discuss the vision, the challenges, the way ahead."

Having Turkey at the table will be key as Ankara has come under some pressure to send its own ground troops into Syria against IS forces.

The country could announce after the meeting that it will join Saudi Arabia in training moderate Syrian rebels, Mr Cordesman said. 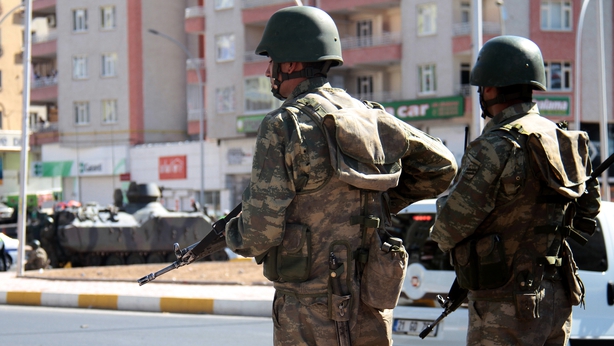 Turkey has not reached a new agreement to let the United States use its Incirlik air base in the fight against IS but reached an agreement with Washington on training Syrian rebels, sources at the Turkish prime minister's office told reporters yesterday, without saying who would train the insurgents or where.

Two senior security officials in the Syrian city of Homs have been fired after a bombing that killed dozens of schoolchildren, stirring rare public protests in a loyalist area.

According to the Syrian Observatory for Human Rights the head of the local military security branch and the chief of the city's security committee had been dismissed from their posts.

The Britain-based monitoring group said the firings came after residents took part in angry demonstrations over the deadly attack at a school on 1 October that killed 48 children, most of them under the age of 12, and four adults.

Many demonstrators called for the resignation of Homs governor Talal Barazi.

Video of a funeral for some of the children showed the event turning into an angry demonstration, with mourners chanting: "The people want the fall of the governor."

Speaking to AFP, governor Barazi said security in the city had been stepped up after the devastating attack, but denied that anyone had been fired.

He said some security officials had been "transferred," adding that "the decision to transfer them was taken before the incident but its implementation coincided with it."

Governor Barazi said security had been increased at schools in Homs city, with checkpoints and roadblocks set up near the facilities.

He said the measures had already yielded results, as yesterday security officials detained a man suspected of planting an explosive device in a rubbish bin.