A new Vatican document has signalled a major shift in the Catholic Church's stance towards gay people, saying they have "gifts and qualities to offer".

It also asked if Catholicism could accept gays and recognise positive aspects of same-sex couples.

Catholic gay rights groups around the world hailed the paper as a breakthrough, but church conservatives called it a betrayal of traditional family values.

The document, prepared after a week of discussions at the Vatican Synod on the Family, said the church should challenge itself to find "a fraternal space" for gays without compromising Catholic doctrine on family and matrimony.

While the text did not signal any change in the church's condemnation of homosexual acts or gay marriage, it used less judgmental and more compassionate language than that seen in Vatican statements prior to the 2013 election of Pope Francis.

"Homosexuals have gifts and qualities to offer the Christian community: are we capable of welcoming these people, guaranteeing to them a further space in our communities?

"Often they wish to encounter a church that offers them a welcoming home," read the document, which was read out in the presence of the Pope at the synod.

"Are our communities capable of proving that, accepting and valuing their sexual orientation, without compromising Catholic doctrine on the family and matrimony?" it asked.

The Gay and Lesbian Equality Network (Glen) said the document provides an opportunity for the church to change the way it treats lesbian and gay people.

Chairman Kieran Rose said the church's response to the forthcoming referendum on civil marriage will demonstrate the practical effects this new openness from the Vatican is having.

He said: "It is a welcome change to hear the Vatican talk about 'accepting and valuing' people's sexual orientation".

Mr Rose added that the document recognises that lesbian and gay couples are parenting children and also acknowledges that the 'needs and rights' of their children should be given priority.

"We hope that the Vatican and the Irish Catholic Church will take the opportunity to support current proposals by the Irish Government to bring legal certainty and security to these families".

New Ways Ministry, a leading US Catholic gay rights group, called the document a "major step forward", praising it for being devoid of the "major gloom and doom and apocalyptic horror" that accompanied past Vatican pronouncements.

London-based Catholic gay rights group QUEST called parts of it "a breakthrough in that they acknowledge that such unions have an intrinsic goodness and constitute a valuable contribution to wider society and the common good".

But John Smeaton, co-founder of the conservative group Voice of the Family, said: "Those who are controlling the synod have betrayed Catholic parents worldwide."

He called it "one of the worst official documents drafted in church history".

The Vatican document will be the basis for discussion for the second and final week of the synod of 200 bishops.

It will also serve for further reflection among Catholics around the world ahead of another, definitive synod next year.

A number of participants at the closed-door gathering have said the church should tone down its condemnatory language when referring to gay couples and avoid phrases such as "intrinsically disordered" when speaking of homosexuals.

That was the phrase used by  pope emeritus Benedict in a document written before his election, when he was still Cardinal Joseph Ratzinger and head of the Vatican's doctrinal department.

The language and tone of today’s document, known by its Latin name 'Relatio', appeared to show that the advocates of a more merciful tone toward homosexuals and Catholics in so-called "irregular situations" - such as unmarried couples living together - had prevailed.

It said that the church should see the development of its position on homosexuals as "an important educational challenge" for the global institution.

While the church continued to affirm that gay unions "cannot be considered on the same footing as matrimony between man and woman", it should recognise that there could be positive aspects to relationships in same-sex couples.

"Without denying the moral problems connected to homosexual unions it has to be noted that there are cases in which mutual aid to the point of sacrifice constitutes a precious support in the life of the partners," the document read.

The paper also noted there were "constructive elements" to heterosexual couples who were married only in civil services or who were living together, but stressed that church marriages were "the ideal".

Pope Francis has said the church must be more compassionate with homosexuals, saying last year: "If a person is gay and seeks God and has good will, who am I to judge."

The church teaches that while homosexual tendencies are not sinful, homosexual acts are. 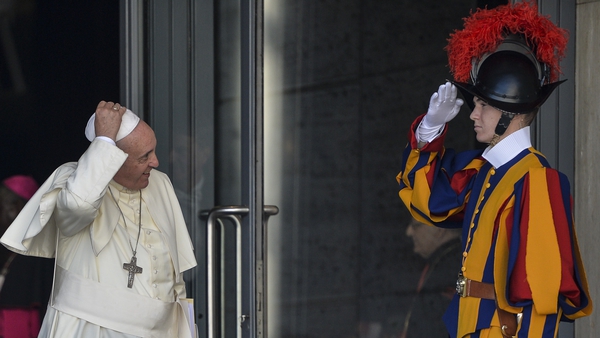