Shelling in eastern Ukraine's rebel-held city of Donetsk killed three people over the past 24 hours, local authorities said this morning, in the latest deadly violations of a ceasefire.

"As a result of military actions in Donetsk on 10 October, three civilians died and four more were injured and hospitalised," the Donetsk city hall said in a statement.

All but completely controlled by the pro-Russian separatists, Donetsk has come under increased crossfire in recent days as rebels and the Ukrainian army battle over the nearby airport.

More than 300 people have died since a ceasefire was signed on 5 September, according to the United Nations.

The Ukrainian authorities report 118 dead civilians and Ukrainian troops, without including rebel casualties.

Ukrainian units have held out since May in Donetsk's international airport northeast of the city, despite nearly daily attacks.

They also control several villages east of the city.

Ukrainian army said today that its positions had been attacked overnight in Donetsk and Lugansk regions.

Donetsk rebel leader Alexander Zakharchenko said this week that an agreement between the separatists and Kiev commanders will see the Ukrainian army cede some villages to begin creating a demilitarised zone between the warring sides as required in the truce deal.

However, Ukraine's military has denied any reports of an agreement with the separatists about surrendering any territory. 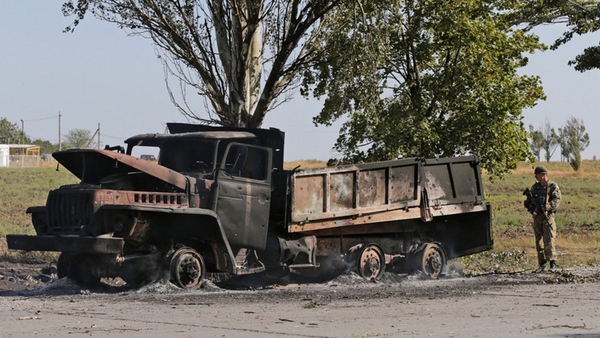