North Korean leader Kim Jong-un has been out of sight for over a month and if he does not appear at a key political event, speculation will intensify over his health and grip on power in the secretive country.

North Korea's state media, which usually chronicles the 31-year-old's whereabouts in great detail, has not made any mention of Mr Kim's activities since he appeared at a concert with his wife on 3 September.

Tomorrow is the 69th anniversary of the founding of North Korea's Workers' Party.

It is an event Mr Kim has marked in the past two years with a post-midnight visit to the Pyongyang mausoleum where the bodies of his father and grandfather are interred.

"Should he fail to appear, it will fuel speculation that the young North Korean leader has fallen on hard times of one kind or another," said Curtis Melvin, a researcher at the US-Korea Institute at the Johns Hopkins School of Advanced International Studies in Washington.

"The longer he remains out of the public eye, the more uncertainty about him, and the status of his regime, will grow."

North Korean officials have denied that the younger Mr Kim's public absence since early September is health-related and a US official following North Korea said this week there were no indications he was seriously ill or in political trouble.

Speculation that Mr Kim's unusually long absence from public view may be due to ill health was fuelled by a North Korean TV report late last month that he was suffering from "discomfort".

Some Pyongyang-watchers also suggest that he may have been sidelined in a power struggle, a scenario they say was reinforced by the unexpected visit on Saturday of a high-level delegation to the closing ceremony of the Asian Games in Incheon, South Korea.

Another interpretation of that visit holds that it was meant to convey stability in Pyongyang.

"It would have to be a very subtle coup indeed not to disrupt international travel plans," said Andray Abrahamian of the Choson Exchange, a Singapore-based NGO currently running a programme for North Koreans in Southeast Asia.

This is not the first time Kim Jong-un has been missing from public view.

In June 2012, six months after coming to power, state media failed to report on or photograph him for 23 days.

He re-surfaced the next month at a dolphinarium.

Mr Kim, who has rapidly gained weight since coming to power after his father died of a heart attack in 2011, had been seen walking with a limp since an event with key officials in July.

He was absent from a 25 September meeting of the Supreme People's Assembly, or parliament, the first he has not attended since coming to power three years ago.

However, Mr Kim's name has not disappeared from state propaganda.

Today's edition of the Workers' Party newspaper, the Rodong Sinmun, carried three letters to Mr Kim from overseas allies on its front page, and has reported on returning athletes from the Asian Games who thanked "the Marshal" for his support during the competition.

Mr Abrahamian said he believes Mr Kim's absence has been due to health reasons and not that he's been usurped.

"Kim Jong-un has always shared power with other key figures and even if the internal balance of power has shifted, it is unlikely that they would want to remove him, given his unmatchable symbolic value. Again, though, everyone is guessing," he said. 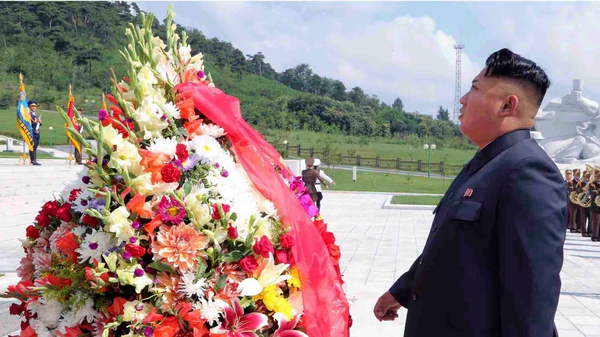