Around 100 Irish soldiers have arrived home from UN duty on the Golan Heights in Syria.

The troops of the 44th Infantry Group were met by family and friends at Baldonnel last night.

Minister for Defence Simon Coveney said they had discharged their duty in a professional manner in difficult and dangerous conditions and said the country could be proud of them.

They have been replaced by 130 troops from the 46th infantry who flew out yesterday morning.

The plane carrying the troops touched down at Casement Aerodrome more than an hour later than scheduled, at 12.30am.

After serving six months in a war zone, the officer commanding the 44th infantry group, Lieutenant Colonel Paul Kennedy, described the mission as challenging and risky, but one they were trained for.

The homecoming was particularly special for Lena Murphy from Waterford as her partner Private Kevin Phelan proposed as soon as he saw her.

She said YES, a soldier proposes to his girlfriend after returning from 6 months in Golan Heights @defenceforces pic.twitter.com/Cbqf00v3k6

Mr Coveney, who waited in the airport until 2am to greet the troops and their families, described them as the backbone of the UN observation force.

Troops from the 44th will now have a month off with their families. 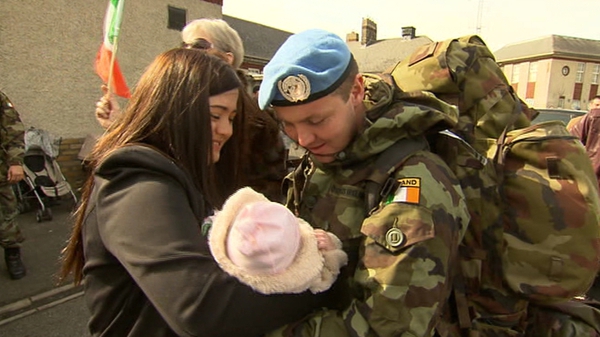