Two great white sharks have been caught and killed off Western Australia, officials said, after an attack in which a young surfer lost both his hands.

The capture of the sharks came as a man who witnessed the attack said the 23-year-old surfer involved, Sean Pollard, might have died if he had not received immediate medical attention.

Mr Pollard lost an arm and his other hand, as well as suffering cuts to his leg in the attack off the south coast of Western Australia, reports said.

"He's obviously swum about 100 metres with those injuries ... it was probably the bravest thing I've ever seen," a witness told Fairfax radio, adding that he drove Mr Pollard from the beach to a waiting ambulance.

He said two men had pulled Mr Pollard out of the water, while a paramedic who happened to be on the beach gave him first aid.

"He was really unlucky but he was really lucky to have had the help he had when he got to the beach by those three people," he added.

The great whites, a protected species, were caught east of the town of Esperance near where Mr Pollard was attacked yesterday, the state Department of Fisheries said.

Authorities said they may not be able to tell whether the sharks were involved in the attack on the surfer.

"Even upon examination it may not be possible to confirm that either shark was involved in the incident. It is common for sharks to disgorge stomach contents," the government agency said.

The sharks' carcasses were transported to the state's capital Perth to be dissected by officials, the department said.

The shark deaths, which occurred while the animals were caught on hooks attached to floating drums, were criticised by conservationists who said it did not reduce the chance of attacks.

"Simply killing sharks will not reduce the risk of a shark attack," Humane Society International said.

The group urged the Western Australian state government to use non-lethal methods for tackling shark attack risks, such as closing beaches and erecting warning signs.

The latest attack came weeks after the government said it would abandon its controversial catch-and-kill shark policy after objections from the state's environmental agency.

Experts said attacks by sharks, which are common in Australian waters, are increasing as water sports become more popular.

A man was killed by a shark in front of his wife last month after being bitten on the leg while swimming at Byron Bay, on Australia's east coast. 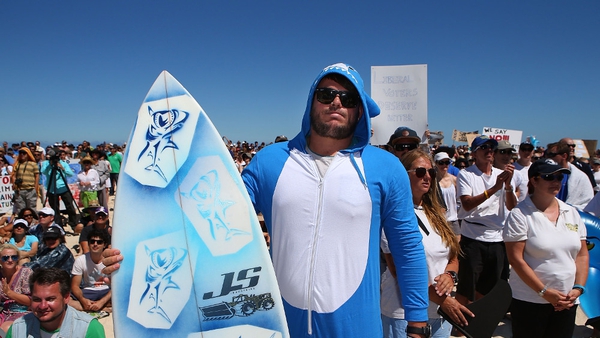