The US Administration is understood to be making plans to play a role in the upcoming new round of peace talks in Northern Ireland, convened jointly by the Irish and British governments.

Following a meeting with US Vice President Joe Biden and Secretary of State John Kerry late yesterday, Minister for Foreign Affairs and Trade Charlie Flanagan said he had "no doubt" they would play a role.

In August, Mr Kerry dispatched former Senator Gary Hart to meet the various parties in Belfast, Dublin and London to ascertain what - if any - role the US could play in any further talks in Northern Ireland.

The minister said he saw a very positive and constructive role for the US in the framework of the new round of talks.

He said he had no doubt they would play a role and was awaiting developments in terms of the details.

The new round of discussions will be convened to break deadlock over the divisive issues of flags, parades and dealing with Northern Ireland's troubled past.

New US Ambassador to Ireland Kevin O'Malley has said that he had been asked to do whatever he could to connect all the parties.

Mr O'Malley will arrive in Ireland to take up his post on Tuesday.

In his first interview as ambassador, Mr O'Malley told RTÉ News that it had been a long wait for him, and for colleagues in the embassy in Dublin and he was looking forward to beginning the job.

He said that the issues in the North were "of concern to everyone" and that he had been asked "to do whatever he could to connect up to all the appropriate parties to arrive at a fair and a just peace" and "to complete the peace process".

Asked about whether there was a direct role for him specifically or the wider US administration, he said it depended on the needs of the parties.

He said it was important for the US to "be whatever help it could be" for all the parties to help arrive at a conclusion to what had been a "very courageous . . . very determined . . . and very time-consuming process", but he would do "whatever made sense and was appropriate to help whomever arrive at the final solution".

However, he said trade between the US and Ireland was also important and probably needed to lead the agenda.

He said President Barack Obama had also asked him to work on business connections between the two countries.

He said Irish-American trade was "quite robust", accounting for $38 billion last year but said that could be improved on.

Mr O’Malley said one of the things that the President wanted him to do was to see what he could do as ambassador to help US business connect with Irish business.

He said the delay in appointing an ambassador to Ireland did not mean anything had changed in terms of relations between the US and Ireland, but just that it had taken some time to find the right person.

He attended his first official Irish engagement last night when he was welcomed to a reception at the Washington residence of the Irish Ambassador to the US Anne Anderson to mark the beginning of celebrations around the 90th anniversary of US-Irish diplomatic relations.

Minister for Justice Frances Fitzgerald was among those in attendance as she was in Washington to take part in a conference of the Global Alliance Against Child Sexual Abuse Online.

Ambassador O'Malley was a trial lawyer in St Louis Missouri before taking up this post.

Both of his grandparents on his father's side left Co Mayo "about 100 years ago" and moved to Chicago. 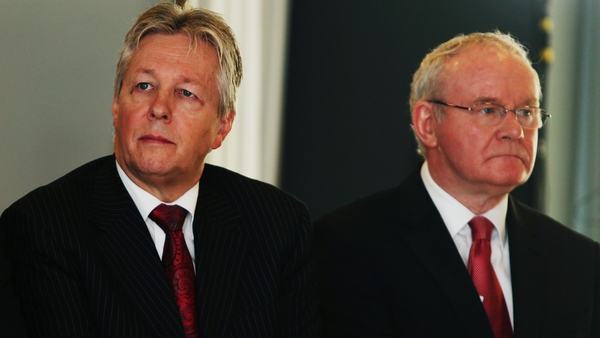