The European Commission has said that two tax arrangements agreed between Ireland and the US computer giant Apple amount to illegal State aid.

The commission released a letter that the EU's Commissioner for Competition sent to the Government in June formally giving its reasons for opening an investigation into Ireland's arrangements with Apple.

The regulators said it is their "preliminary view" that deals entered into between Apple and the Irish tax authorities in 1991 and 2007 "constitute State aid" and therefore breached the 28-member EU's rules on a free internal market.

Commissioner Joaquin Almunia stated in the letter: "The commission has doubts about the compatibility of such State aid with the internal market.

"The commission is of the opinion that through those (tax) rulings the Irish authorities confer an advantage on Apple.

"That advantage is obtained every year and ongoing, when the annual tax liability is agreed upon by the tax authorities in view of that ruling."

The commission asked Ireland to provide further information about the deals, which have benefited Apple since 1991.

The Government has strongly denied there was any preferential deal with Apple and has vowed to contest any ruling against the State in the European courts.

However, Apple would be required to repay potentially billions in restitution if found at fault.

According to the European Commission, the way Apple's Irish operations were to be assessed for tax may have been manipulated in order not to jeopardise Apple jobs in Ireland.

Jobs may have been factor - EC

During an interview between one of Apple's tax advisers and the Irish tax authorities in 1990, the adviser "mentioned by way of background information that Apple was now the largest employer in the Cork area with 1,000 direct employees and 500 persons engaged on a sub-contract basis".

The interview recorded the tax adviser as stating that Apple was "at present reviewing its worldwide operations" and it wished to "establish a profit margin on its Irish operations".

The letter contended that Apple negotiated a "mark up on costs" at one of its Irish subsidiaries, Apple Sales Ireland (ASI), for tax purposes "in order not to prohibit the expansion of the Irish operations".

Blog: Tax probe could upset the Apple cart for Ireland

It focuses on the practice of transfer pricing, or the artificial shifting of the profits of subsidiaries between jurisdictions in order to attract a lower rate of corporate tax.

The higher the level of taxable income attributed to Apple's Irish branches, then the lower the overall tax Apple would pay, because Ireland's corporate tax rate was significantly lower than elsewhere.

Transfer pricing is acceptable according to international standards, so long as it is done "at arms’ length", according to officials familiar with the process.

This means that the arrangements should not favour one company over another.

The European Commission contends that if "arms’ length" was not applied then it could amount to illegal state aid from the Government to Apple.

The letter published by the commission is based on information sent by the Irish authorities to the commission since the issue was first raised in June 2013.

It records details of negotiations between Apple and Revenue dating back to 1990.

The commission quotes an internal Revenue note from 1990 concluding that Apple's tax advisor was "clear that the company was engaged in transfer pricing".

The note recalled that Apple's Irish subsidiary showed a net profit in 1989 of $269 million on a turnover of $751m.

The Revenue note concluded: "No company on the Irish Stock Exchange came close to achieving a similar result."

According to the commission investigation, the Irish tax authorities were willing to negotiate a level of profit for the Irish branch of Apple "based on a percentage of the actual costs attributable to the Irish branch".

The amount for 1990 was 46%, more than double the figure of between 10% and 20% "which is normally attributable to a cost centre," according to the commission.

Following further negotiations between Apple and Revenue, the figure was increased to 65%.

It argued that the allocation of profit for tax purposes was "negotiated" rather than through the use of a "pricing methodology".

It stated that the basis of allocating profit was "not done in a reasoned way".

Revenue officials are also quoted as considering a figure put forward by Apple's tax adviser of between $30-$40m, which would be attributable to "manufacturing activity" on the basis of an annual profit of $100m in 1990.

Revenue reportedly asked Apple's advisor as to the basis of this figure. A note of the conversation showed that Apple's advisor "confessed that there was no scientific basis for the figure".

The letter also refers to so called Advance Pricing Agreements (APAs), which are agreements between companies and tax authorities on how transfer pricing arrangements will work into the future, and sometimes referred to as "letters of comfort".

The commission noted that in most EU countries these agreements would last for between three and five years, but in Ireland's case ran from 1991 and 2007 when Revenue revised its agreement with Apple.

It uses payments between related parts of a multinational company to shift income from a higher-tax country to a lower-tax country.

In a statement, Apple denied it received "selective treatment".

It said: "Apple has received no selective treatment from Irish officials over the years.

"We're subject to the same tax laws as the countless other companies who do business in Ireland.

"To continue that growth and the benefits it brings to the communities where we work and live, we believe comprehensive corporate tax reform is badly needed."

Meanwhile, Minister for Justice Frances Fitzgerald has said the Government is "very confident" that it did not grant illegal state aid to Apple.

Speaking at a meeting of the Global Alliance against Child Abuse Online in Washington DC, the minister said the Government would fight the accusations as long as necessary.

She said this letter was just the beginning of further legal proceedings and the Government would be making its case.

Ms Fitzgerald said the Government was very confident that it did not breach any rules.

Elsewhere, the Chief Executive of the American Chamber of Commerce Ireland, Mark Redmond, has said the Government has been very clear on its approach to winning business.

Speaking on RTÉ Radio's News at One, he said: "We really welcome the Government's statement that they are confident there has been no state aid breach and that they will defend all aspects vigorously.

Tánaiste Joan Burton has said that Ireland had cooperated with various authorities, including the OECD and the European Commission, who had raised issues regarding Ireland, tax policy and international tax competition.

Ms Burton said Ireland would continue to cooperate in full, adding that at this point she did not want to prejudge the outcome of any enquiries.

Minister for Foreign Affairs and Trade Charlie Flanagan has said that the Government intends to "robustly defend" its position in relation to the accusations made by the European Commission about tax arrangements for Apple in Ireland.

Speaking in Washington DC after attending the swearing-in ceremony of the new US Ambassador to Ireland, Minister Flanagan said the Ireland would "vigorously rebut any adverse assertions" that have been made.

He said there was a process under way with the Commission, but that Ireland would have an opportunity to "state our case and to defend our position".

He said ultimately there would be a report on the matter which the Government would await. 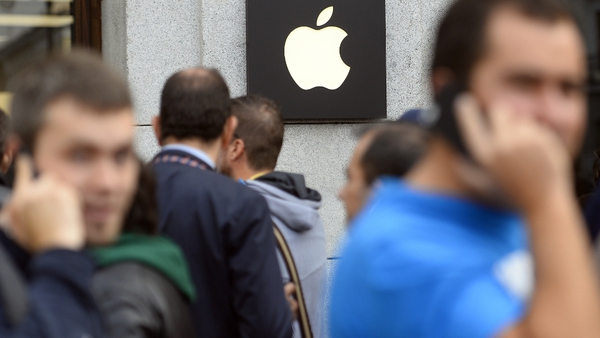