Fine Gael's John McNulty has announced he is to step down from the board of the Irish Museum of Modern Art.

Taoiseach Enda Kenny had come under pressure in recent days over the appointment of Mr McNulty to the board.

Fianna Fáil said the appointment was made to help the candidacy of the Donegal businessman in a forthcoming Seanad by-election.

However, Minister for Arts, Heritage and the Gaeltacht Heather Humphreys had said she appointed Mr McNulty on his own merits.

Mr McNulty said in a statement that the institution's internal rules prevent him from being a board member and contesting an election at the same time.

He said: "I am stepping down from the IMMA board with immediate effect, in accordance with IMMA's internal rules, which preclude me from being a board member and contesting an election at the same time.

"I will continue to be a member of IMMA, and an active supporter of their work."

He added that he looked forward to continuing his election campaign for a seat in the Seanad.

Mr Kenny has commented on the controversy, saying he looked at all the candidates for this Seanad by-election position and said they all had particular qualities.

He also said he had never given instructions for ministers to make appointments.

On the issue of gender, he said the numbers of women who serve in the Cabinet is at an unprecedented high number.

He also said that two by-election candidates in Dublin and Roscommon are women, that he had appointed Senator Hildegarde Naughton to the Seanad.

Mr Kenny said the party's executive council chairperson is a woman and the next director of elections is Frances Fitzgerald.

Fine Gael TD John Deasy had this afternoon said the appointment process regarding Mr McNulty's nomination to the Seanad had clearly been manipulated and abused.

Speaking on RTÉ's News at One, he said that people were disgusted at how Fine Gael was being run.

Mr Deasy also said the promotion within the party was based on loyalty to the Taoiseach and not on ability.

The Donegal businessman has been nominated by Fine Gael to fill the vacancy left by the election of former Senator Deirdre Clune to the European Parliament in May.

Mr Deasy said the controversy was indicative of what has been going on in Fine Gael for some time.

The calculation from the Taoiseach was that "he can pretty much do anything he wants," because as long as the economy continues to improve the public will not care, the Waterford TD added.

"We all know what happened. It really was a case of pointing that out and asking for some accountability with regard to the process here, which was clearly manipulated and abused, and this appointment to the IMMA board was to construct a credential to allow Mr McNulty to pursue the [Seanad] nomination."

Mr Deasy said he believed Minister Humphreys nominated Mr McNulty at the request of the Taoiseach and that she simply did "what she was told to do".

He said there was an uncomfortable viewpoint expressed at last night's parliamentary party meeting.

Mr Deasy added that there was a sense of fear within the parliamentary party that if you did not toe the line you would be punished. He said the Taoiseach was at the heart of this.

Ms Humphreys said Mr McNulty had indicated an interest in the area and she looked at his credentials and formed the view that he was a good person.

The minister said the two appointments she made to the IMMA board were intended to give a regional spread to a Dublin-based body.

She had no role in his selection as a Seanad candidate, she added.

Fine Gael accused of 'jobs for the boys'

Earlier, the nomination of Mr McNulty was raised in the Dáil.

Sinn Féin's Mary Lou McDonald said the Taoiseach had bought into the policies of the past by appointing Mr McNulty to the board of IMMA.

She said this was a case of job for the boys and there was a stink of cronyism.

Tánaiste Joan Burton said that a vacancy arose in the Seanad and the practice was that the party from which the vacancy arose had the right to fill that vacancy.

Ms Burton said Sinn Féin had also availed of what is a "standard practice". She said all parties have followed this practice.

Elsewhere, Fianna Fáil leader Micheál Martin called for the Seanad by-election to be suspended because of the controversy.

He also called on Mr Kenny to apologise to the board of IMMA.

Mr Martin claimed the board had been abused for internal Fine Gael party reasons.

However, Minister for Foreign Affairs and Trade Charlie Flanagan said that he does not consider the nomination of Mr McNulty as a Seanad candidate as "stroke politics".

Speaking in New York, Minister Flanagan said that he did not know Mr McNulty but was "satisfied" that he was "eminently qualified for the position".

One of the women overlooked for the nomination has resigned from the Fine Gael party.

Samantha Long said that "geography" and not gender was the main factor in choosing the party's nominee and she described it as "unfortunate politics".

Speaking on RTÉ's News at One, Ms Long said she was disappointed a woman had not been chosen for the Seanad nomination and she would now step away from politics to rebuild her career.

She said: "While I wasn't personally hopeful to be that nominated candidate, I'm very disappointed that it wasn't a woman, a suitably capable and a suitably qualified woman.

"I see it as geography over, possibly talent and definitely gender, and geographical considerations have come into this as the main consideration for this nominee."

Ballots will be issued in the by-election tomorrow. Polls close at 11am on 10 October. 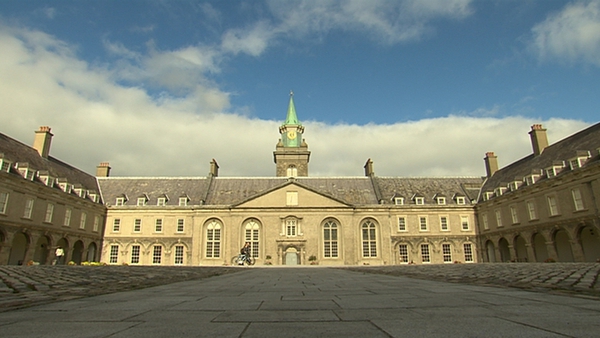