The UN Security Council has unanimously approved a binding resolution on stemming the flow of foreign jihadists to Iraq and Syria.

The resolution requires all countries to adopt laws that would make it a serious crime for their nationals to join jihadist groups such as Islamic State and Al-Nusra Front.

Meanwhile, the United States and Arab partners are carrying out another night of air strikes against Islamic State militants in Syria, the Pentagon has said.

Aircraft from Saudi Arabia and the United Arab Emirates took part in the latest round of US-led bombing raids, Pentagon officials said.

The officials would not say exactly how many warplanes from each of the two Arab countries participated in the strikes, which included attacks on oil facilities controlled by the IS group.

British Prime Minister David Cameron earlier announced the recall of parliament to seek MPs' approval for the UK's involvement in air strikes on the Islamic State terror group in Iraq.

MPs will return to Westminster on Friday for a vote.

It could clear the way for RAF planes to join the US, France and a number of Arab states in bombarding IS positions as early as the weekend.

Mr Cameron said he was confident he would get the support of the House "on an all-party basis".

The Prime Minister said he was responding to a request for assistance from the Iraqi government - seen by British officials as providing the legal underpinning for military action.

He made clear that the action would be restricted to Iraq and it would require a further debate and vote by MPs if the government was to extend air strikes into Syria.

Call to 'prevent and suppress' recruitment of fighters

Earlier, US President Barack Obama called on the world to join the US-led coalition to defeat jihadists in Iraq and Syria, branding them terrorists engaged in a "network of death".

"The only language understood by killers like this is the language of force," Mr Obama said in his address to the 193-nation assembly. 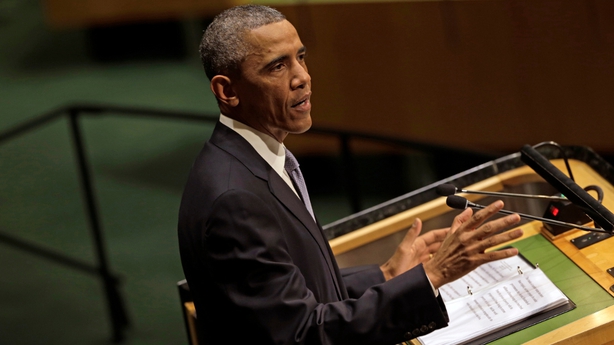 "We will use our military might in a campaign of air strikes to roll back ISIL," he added, referring to the Islamic State of Iraq and the Levant also known as Islamic State.

The US-drafted resolution called on all countries to "prevent and suppress" recruitment and all forms of assistance to foreign fighters. It makes it illegal to collect funds or help organise their travel.

Mr Obama warned: "Those who joined ISIL should leave the battlefield while they can."

The resolution falls under Chapter 7 of the UN charter, which means the measures could be enforced by economic sanctions or military force.

The appeal for support of the US-led effort was coupled with a call to Muslim countries to reject the ideology of radical Islam, by cutting off funding to extremists and taking aim at militant propaganda on the internet.

"The ideology of ISIL or al-Qaeda or Boko Haram will wilt and die if it is consistently exposed, confronted and refuted in the light of day," he said.

Appealing directly to the Muslim youth, Mr Obama declared that Islam had traditionally valued education, innovation and the dignity of life.

"Those who call you away from this path are betraying this tradition," he warned.

The US will be a "constructive partner" with Muslim countries in the fight against radical Islam, said Mr Obama, but ultimately, this is a "task for the people of the Middle East themselves".

Meanwhile, the IS group has reinforced fighters who are battling Kurdish forces for control of a Syrian city at the border with Turkey, according to a Kurdish military official.

Ocalan Iso, deputy leader of the Kurdish forces defending the town of Kobane at the Turkish border, said more IS fighters and tanks had arrived since the coalition began air strikes on the group.

IS-controlled territory in the city and province of Raqqa was hit in the air strikes by a US-led alliance yesterday.

He said IS forces had advanced to within 8km of the southern periphery of Kobane, which is also known as Ayn al-Arab - closer than they had been at any stage.

Air strikes last night hit IS territory in Syria near the Turkish border, an organisation that tracks violence in the Syrian war said.

Rami Abdulrahman, who runs the Syrian Observatory for Human Rights, said the warplanes that carried out the raids west of the city of Kobane, had come from the direction of Turkey.

He added that they were not Syrian.

The observatory gathers its information from a network of activists across Syria.