The incident came hours after self-proclaimed Islamic State militants warned it would target France after Paris launched air strikes against them in Iraq.

"A French national was kidnapped on Sunday in Algeria, in the region of Tizi Ouzou, while he was on holiday there," deputy Foreign Ministry spokesman Alexandre Georgini said in a statement.

"Nobody has claimed responsibility for the kidnapping."

The militant group this evening posted a video purporting to show the French man.

In it he says he has been taken by an IS splinter group, called the Caliphate Soldiers, and calls on President Francois Hollande to halt French intervention in Iraq.

The man, who gives his name, age and date of birth, said he had arrived in Algeria on 20 September and was taken the following day.

"I am in the hands of Jund al-Khilifa, an Algerian armed group.

"This armed group is asking me to ask you (President Francois Hollande) to not intervene in Iraq. They are holding me as a hostage and I ask you Mr President to do everything to get me out of this bad situation and I thank you."

The foreign ministry could not immediately confirm the authenticity of the video.

In a statement earlier today, an IS spokesman urged its followers to attack citizens of the United States, France and other countries which have joined a coalition to destroy the ultra-radical group.

If carried out by militants, the kidnapping would be one of the first abductions of a foreigner by militants in the North African country since Algeria ended its decade-long war with Islamist fighters in the 1990s.

The area where the Frenchman was taken is a mountainous region which was once a stronghold for the fighters. There have been several kidnappings targeting Algerian businessmen for extortion in the area but most were freed by security forces.

Al-Qaeda's North Africa branch, AQIM, and other groups are still active in Algeria.

France, which today raised the threat level at 30 of its embassies across the Middle East and Africa, on Friday launched its first air strikes targeting IS targets in Iraq and has said everything must be done to rid the region of the group.

The US is building an international coalition to combat the extremist Sunni Muslim force, which has seized large Aexpanses of territory in Iraq and Syria and proclaimed a caliphate erasing borders in the heart of the Middle East.

In Iraq, Jihadists attacked an army base west of Baghdad with six suicide bombers, killing 40 soldiers and capturing at least 70 others who fled, a senior army officer said.

Four suicide bombers detonated explosives-rigged armoured personnel carriers at the base in Saqlawiyah yesterday, while two others attacked with explosive belts.

IS militants, who led an offensive that overran swathes of the country in June, detonated a bridge near the base five days ago, isolating it, the officer said.

Turkey has closed some of its border crossings with Syria following an influx of nearly 100,000 Kurdish refugees over the weekend to escape an offensive by jihadists from the self-styled Islamic State.

The Turkish government estimates the number of refugees crossing the Turkish border is closer to 130,000.

Speaking to reporters in Ankara, the country’s deputy prime minister, Numan Kurtulmus, said Turkey was "prepared for the worst scenario, which is an influx of hundreds of thousands of refugees".

Syrian Kurds are leaving the area around Ain al-Arab, or Kobane, as the town is known in Kurdish, which is under attack by IS.

Until now, Kobane, the third biggest Kurdish population centre in Syria, had been relatively safe and had taken in 200,000 people displaced from elsewhere in Syria.

IS has captured more than 60 villages around Kobane over the past five days, which has triggered an exodus of terrified civilians.

Forty-two people, including 16 children, were killed by the Syrian government in air strikes yesterday, according to a human rights group.

The strikes were carried out yesterday in the largely rebel-held province of Idlib.

During the weekend Syrian refugees crossed through 9 border crossings into #Turkey pic.twitter.com/xSTqRSieph 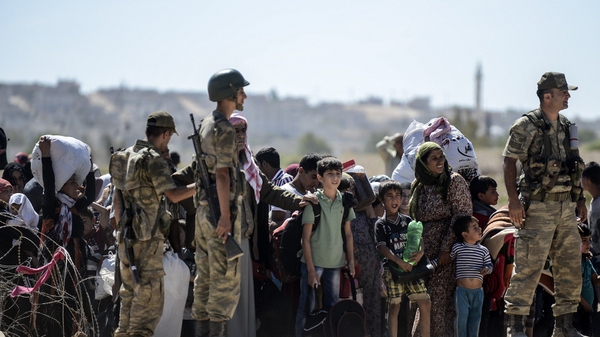