A French volunteer working for Médecins Sans Frontières in Liberia has contracted the Ebola virus, the medical charity said in a statement.

The volunteer, the first French national to catch the disease in the current outbreak, was put in quarantine on 16 September when the first symptoms of the illness appeared.

She will be evacuated to a specialised treatment centre in France.

Meanwhile, the GOAL Chief executive Barry Andrews has urged the Government to increase aid efforts in response to the Ebola outbreak in west Africa.

Mr Andrews was speaking on RTÉ's Morning Ireland after returning from Sierra Leone, one of the countries worst affected by the virus.

Mr Andrews said an enormous effort was required to tackle the disease in west Africa.

He said it was not just a question of funding, but was also a question of the possibility of deploying logistical capacity within the military, and perhaps health officials within the Health Service Executive.

The minister also suggested putting pressure on the Irish pharmaceutical industry to try to assist in supplies.

Mr Andrews said if this was repeated throughout countries that have traditionally helped in these types of situations, it would begin to be a proportionate response.

At the moment it was all words, he said.

People were working in extremely dangerous circumstances in west Africa at the moment, Mr Andrews added.

The virus has so far claimed the lives of more than 2,400 people.

Ebola is rife in west Africa where 53% of those infected are killed.

Elsewhere, a healthy British person is to become the first to trial a potential new vaccine for the Ebola virus.

The volunteer will be given the inoculation in a safety trial being conducted by experts at the University of Oxford.

The person will be the first of 60 to receive the experimental drug in the UK trial.

The World Bank has warned that fear of the virus is choking off economic activity in west Africa with potentially "catastrophic" results.

The "fear factor" is spurring even people unaffected by the disease to pull back on their work activities - in farming, mining, manufacturing or other areas - so that they are producing less, earning less and spending less.

That is exacerbating the already heavy burden Ebola is exacting on the finances and health systems of the three hardest-hit countries.

"If the virus continues to surge in the three worst-affected countries - Guinea, Liberia, and Sierra Leone - its economic impact could grow eight-fold, dealing a potentially catastrophic blow to the already fragile states," the World Bank said.

However, it said the mobilisation in recent days of more resources to fight the disease could mitigate much of the economic damage.

"The primary cost of this tragic outbreak is in human lives and suffering, which has already been terribly difficult to bear," said World Bank President Jim Yong Kim.

"But our findings make clear that the sooner we get an adequate containment response and decrease the level of fear and uncertainty, the faster we can blunt Ebola's economic impact." 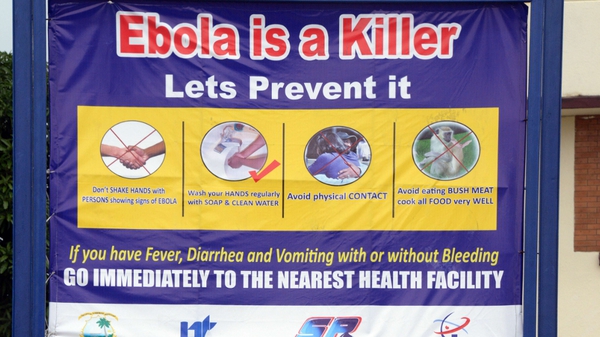 Timeline of the Ebola outbreak