US President Barack Obama has awarded the Medal of Honor to two Vietnam veterans.

The medal is the highest military award for conspicuous gallantry while in combat.

The first medal was awarded posthumously to Specialist Four Donald P. Sloat, who sacrificed his life to save his comrades, Mr Obama said.

"When the lead soldier tripped that wire and set off a booby trap, the grenade rolled right to Don's feet. And at that moment he could have run.

"At that moment, he could have ducked for cover. But Don did something truly extraordinary. He reached down and he picked that grenade up.

"And he turned to throw it, but there were Americans in front of him and behind him inside the kill zone. So Don held on to that grenade, and he pulled it close to his body, and he bent over it. And as one of the men said, 'All of a sudden there was a 'boom'," Mr Obama said.

Specialist Sloat's brother accepted the award, which was presented in a wooden and glass case, on his behalf.

The second award was received by Command Sergeant Major Bennie G. Adkins, who Mr Obama said had placed himself in the line of fire repeatedly to save fellow Americans. 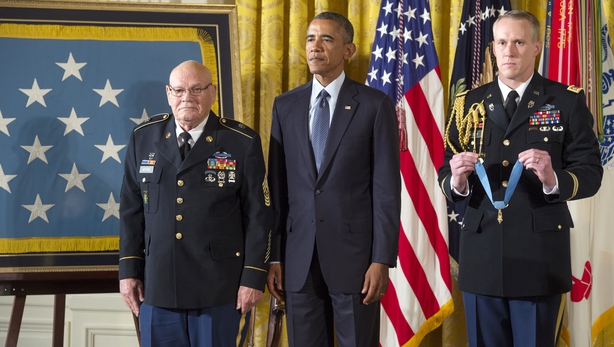 "A Vietnamese soldier jumped on to the helo and aimed his weapon directly at the wounded soldier ready to shoot, Bennie stepped in, shielded his comrade, placing himself directly in the line of fire, helping to save his wounded comrade.

"At another point in the battle, Bennie and a few other soldiers were trapped in the mortar pit, covered in shrapnel and smoking debris. Their only exit was blocked by enemy machine gun fire.

"So Bennie thought fast. He dug a hole out of the pit and snuck out the other side. As another American escaped through that hole he was shot in the leg. An enemy soldier charged him, hoping to capture a live POW, and Bennie fired, taking out that enemy and pulling his fellow American to safety", Mr Obama said.

Mr Obama told the family and friends of the honorees that the medal is normally awarded within a few years of the act of gallantry.

However, he said that when new evidence of actions from the past comes to light, it is more than appropriate to honour veterans.