Ian Paisley was known for his statements and rhetoric. Here are some of his most notable quotes.

"Save Ulster from sodomy!" - his slogan in a 1970s and 80s campaign against legalising homosexuality.

"Never, never, never, never ... " - outside Belfast City Hall as he addressed tens of thousands of loyalists protesting against the signing of the November 1985 Anglo-Irish Agreement.

"I am not going to sit down with bloodthirsty monsters who have been killing and terrifying my people" - opposing demands to sit down and talk with Sinn Féin.

"The scarlet woman of Rome" - his description of Pope John Paul II. 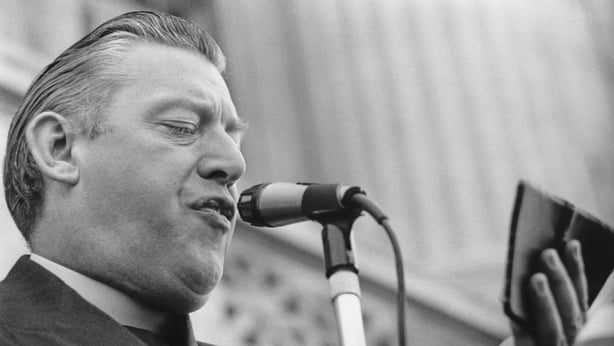 "I don't like the President of the Irish Republic because she is dishonest" - his description of the former President Mary McAleese.

"Mr Adams would have to repent from his evil ways. I am here tonight by the grace of God, a sinner saved by grace" - New York, 1994, when asked if he would shake Sinn Féin leader Gerry Adams's hand.

"Talk about dancing at Christmas on the graves of Ulster dead, and to be given the facility so to dance by the British Prime Minister ... Here we saw the godfathers of those who planned the bombing of Downing Street, standing outside there and piously pretending they were engaged in a search for peace" - reacting to the Downing Street meeting of Sinn Féin leader Gerry Adams and British Prime Minister Tony Blair in December 1997.

"I denounce you, Antichrist! I refuse you as Christ's enemy and Antichrist with all your false doctrine" - addressing Pope John Paul II on a visit to the European Parliament October 1988.

"This Romish man of sin is now in hell! - on the death of Pope John XXIII.

"The IRA's bishop from Crossmaglen" - describing the then head of the Catholic Church in Ireland, Tomás Ó Fiaich.

"Line dancing is as sinful as any other type of dancing, with its sexual gestures and touching. It is an incitement to lust."

"No surrender. We will never bend the knee" - a regular cry aimed at those he believed were ready to "betray" Ulster.

"Protect us from the shackles of priestcraft" - late 1970s in an attack on the Catholic Church.

"The breath of Satan is upon us" - his remark when he entered a Belfast press conference in a smoke-filled, whisky-sodden hall in the mid-1970s.

"Let me smell your breath first, son" - Paisley's regular request to reporters, whom he suspected of drinking, before he would allow them to interview him.

"The devil's buttermilk" - his description of alcoholic drinks, chiefly Guinness.

"This is the spark which kindles a fire there could be no putting out" - his criticism of a diversion ordered by the police of a "provocative" Orange Order march.

"Because it would be hard for you to poison them" - when asked why he had chosen boiled eggs for breakfast during a top-level meeting at the Irish Embassy in London.

"No, I wouldn't" - his response to John Hume, an SDLP politician who said that if the word "no" were removed from the English language, Paisley would be speechless. 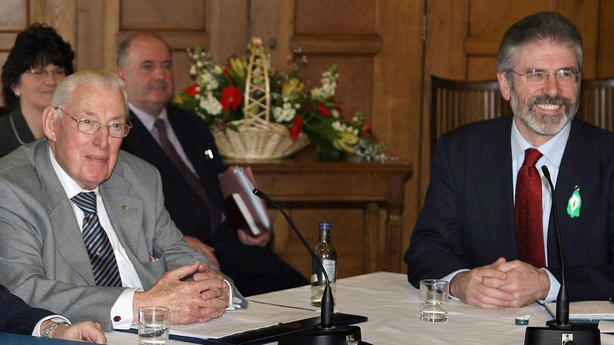 "We are not going into government with Sinn Féin" - after the confirmation of IRA's decommissioning of its arms.

"We do not know how many guns, the amount of ammunition and explosives were decommissioned, nor were we told how the decommissioning was carried out. There were no photographs, no detailed inventory, and no detail on the destruction of these arms. To describe today's statement as transparent would be the falsehood of the century" - on IRA decommissioning of weapons, September 2005.

"If anybody had told me a few years ago that I would be doing this, I would have been unbelieving" - inside Parliament Buildings, Stormont, after agreeing to enter a power-sharing government with former IRA leader Martin McGuinness as his Deputy First Minister.

"People have come out of a dark tunnel and they can see there is a path out there for us. I think it has put a lot of faith and hope into people" - on the eve of being sworn in as First Minister of the power-sharing government.

"I believe that Northern Ireland has come to a time of peace, a time when hate will no longer rule. How good it will be to be part of a wonderful healing in our province" - his inaugural speech as First Minister.

"Today, we can confidently state that we are making progress to ensure that our two countries can develop and grow side by side in a spirit of generous cooperation. Old barriers and threats have been, and are being, removed daily" - after the handshake.

"I might as well make hay while the sun shines" - 2007, saying he intended to defend his North Antrim seat at the next general election and remain as First Minister for the full term.

Extract of speech delivered at Stormont upon taking his seat as Northern Ireland first Minister.

"Winning support for all the institutions of policing has been a critical test that today has been met in pledged word and deed. Recognising the significance of that change from a community that for decades demonstrated hostility for policing, has been critical in Ulster turning the corner.

"I have sensed a great sigh of relief amongst all our people who want the hostility to be replaced with neighbourliness.

'To everything there is a season, and a time to every purpose under heaven.

'A time to be born and a time to die.

'A time to plant and a time to pluck up that which is planted.

'A time to kill and a time to heal.

'A time to break down and a time to build up.

'A time to get and a time to lose.

'A time to keep and a time to cast away.

'A time to love and a time to hate.

"I believe that Northern Ireland has come to a time of peace, a time when hate will no longer rule.

"How good it will be to be part of a wonderful healing in our province.

"Today we have begun to plant and we await the harvest." 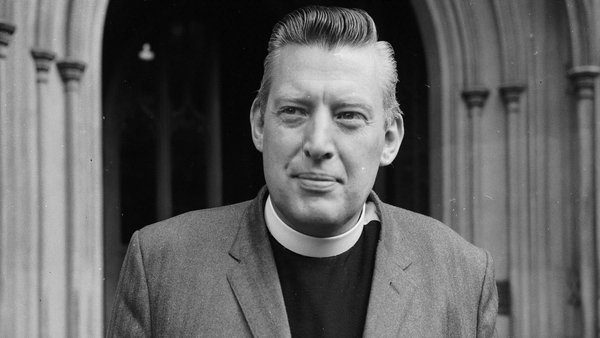