US Secretary of State John Kerry has warned against "war fever" and said the new American campaign against the Islamic State (IS) jihadist group should be understood as a counter-terrorism mission.

Speaking the day after President Barack Obama announced a "relentless" campaign of air strikes against militants from IS, which which is also known by the acronyms ISIL and ISIS, in Iraq and ultimately in Syria, Mr Kerry declined to call the operation a war.

"What we are doing is engaging in a very significant counter-terrorism operation," Mr Kerry told CNN in Jeddah, Saudi Arabia, during a tour of regional allies to drum up support for joint action.

"It's going to go on for some period of time," he warned. "If somebody wants to think about it as being a war with ISIL, they can do so, but the fact is it's a major counter-terrorism operation that will have many different moving parts."

Separately, CBS reporter Margaret Brennan tweeted that Mr Kerry had told her: "I don't think people need to get into war fever on this."

Meanwhile, the Pentagon announced that US warplanes would start using a base outside the Iraqi Kurdish capital Arbil, having previously been operating from airbases and carriers outside the country.

Ten Arab states, including Saudi Arabia, have agreed to rally behind the United States in the fight against IS, as the US vies to build an international coalition.

"The participating states agreed to do their share in the comprehensive fight" against IS, said a statement at the conclusion of a meeting in Jeddah between Mr Kerry and his Arab counterparts.

In addition to Saudi Arabia, the other Arab states are Bahrain, Egypt, Iraq, Jordan, Kuwait, Lebanon, Oman, Qatar and the United Arab Emirates.

Although Turkey was represented in the meeting, it was not mentioned in the final communique and a government official said Turkey had refused to take part in combat against the militants.

Mr Kerry is to fly tomorrow to Ankara for urgent talks with officials with what is a key ally of the US.

"CIA assesses the Islamic State of Iraq and the Levant (ISIL) can muster between 20,000 and 31,500 fighters across Iraq and Syria, based on a new review of all-source intelligence reports from May to August," CIA spokesman Ryan Trapani said in a statement.


Earlier, US President Barack Obama said he was prepared to order air strikes on Syrian territory as part of an expanded counter-terrorism plan to confront IS.

Mr Obama, who began ordering air strikes in Iraq last month, urged Congress in a national television address to give him "additional authorities and resources to train and equip" the Syrian opposition.

"I will not hesitate to take action against ISIL in Syria, as well as Iraq," Mr Obama said while discussing the prospect of expanded airstrikes.

"Working with the Iraqi government, we will expand our efforts beyond protecting our own people and humanitarian missions, so that we're hitting ISIL targets as Iraqi forces go on offence.

"This is a core principle of my presidency: if you threaten America, you will find no safe haven."

Mr Obama said another 475 troops are to join hundreds of US troops who are already in Iraq studying how to help Iraqi government and Kurdish regional forces in their fight against the jihadist threats.

He said: "Now that those teams have completed their work and Iraq has formed a new unity government, we will send an additional service members to Iraq.

"As I have said before, these American forces will not have a combat mission - we will not get dragged into another ground war in Iraq.

"But they are needed to support Iraqi and Kurdish forces with training, intelligence and equipment."

Syria's Western-backed National Coalition opposition has urged the US Congress to approve as soon as possible President Obama's policy on IS militants.

"The Syrian Coalition... stands ready and willing to partner with the international community not only to defeat ISIS but also rid the Syrian people of the tyranny of the Assad regime," coalition president Hadi al-Bahra said in a written statement.

US politicians say they are on the verge of taking a "war vote" as they consider whether to back President Obama's campaign to destroy IS, and despite broad support for action many fear being drawn into a quagmire.

The White House wants Congress to approve $500m to train and arm moderate Syrian rebels to battle IS militants, a show of confidence for administration officials as they try to form an international coalition.

The beheadings of two US captives by IS have steeled politicians to the need for more military action, and both Democratic and Republican congressional leaders were supportive of Obama's plan yesterday.

But some Republicans in particular say they want more information from the administration about its wider strategy to combat global terrorism, and many would prefer a broad vote rather than one focused on funding.

Republican Senator Rand Paul, also from Kentucky and normally a leader of his party's isolationist wing, said he would support military action against Islamic State, but wants Obama to "follow the Constitution" and seek congressional authorisation.

Just a year ago, US politicians recoiled at the thought of military strikes against Syria's government for using chemical weapons.

They handed Mr Obama an embarrassing foreign policy defeat as anti-war Democrats joined isolationist Republicans in a rare show of bi-partisanship that killed his request for strikes.

Democrats are crossing the aisle again, this time as they voice strong support for attacking Islamic State, though the overwhelming majority of lawmakers from both parties oppose the idea of sending in any US ground troops.

The White House has said Mr Obama he does not believe he needs Congress' formal authorisation to attack Islamic State.

Meanwhile, the White House is dispatching top administration officials to conduct closed-door briefings for the full Senate and House today.

Mr Obama hosted the four leaders of Congress at the White House on Tuesday, and yesterday Senate Majority Leader Harry Reid, a Democrat, backed the plan to train Syrian rebels.

Members campaigning ahead of the 4 November elections - in which the entire House and one-third of the Senate are up for grabs - said they had been hearing concerns about Islamic State from voters, a departure from Americans' typical focus on domestic issues. A Washington Post-ABC News poll this week showed that 71% of all Americans support the air strikes in Iraq, up from 54% three weeks ago and from 45% in June.

Democratic congressional aides said privately that some party members in tough re-election contests are asking that there be no broad authorisation vote, to avoiding any chance at alienating their anti-war supporters.

British Prime Minister David Cameron is not ruling out military action against Islamic State militants in Syria, a spokesman said today, after Foreign Secretary Philip Hammond said Britain would not join any US air strikes in Syria.

"The prime minister has not ruled anything out," the spokesman said, adding that Hammond's comments were in reference to a parliamentary vote last year on military action in Syria which the government lost.

But the spokesman added: "No decisions have been been taken".

Speaking during a visit to Berlin earlier on Thursday, Hammond said: "Let me be clear, Britain will not be taking part in any air strikes in Syria".

"We've already had that discussion in our parliament last year and we won't be revising that position," he said at a joint press conference with German Foreign Minister Frank-Walter Steinmeier.

Cameron has previously said he would act against the militants to protect Britain's national interest even without parliamentary approval, although Britain has so far limited to action against IS in Iraq providing humanitarian aid, arms for Kurdish fighters and logistical support for US raids. 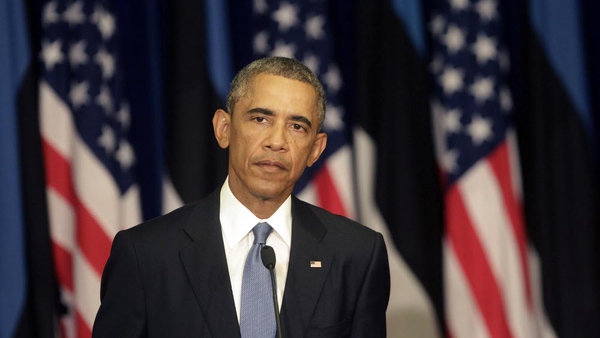 Obama to announce airstrikes against IS News