A new opinion poll shows that 53% of Scots intend to vote No in the upcoming referendum on independence.

The survey, carried out by Survation on behalf of the Daily Record newspaper, showed 47% intending to vote Yes.

The figures excluded 10% of people who were undecided.

Earlier, Scottish First Minister Alex Salmond said Ireland has nothing to fear from an independent Scotland.

With the referendum on a knife-edge, the leaders of the three main Westminster parties travelled to Scotland to shore up support for the No campaign, which has lost significant ground over recent weeks.

When asked if an independent Scotland would be a direct competitor to Ireland when it came to attracting business, Mr Salmond told RTÉ News that competition between countries was a good thing.

He said in such a scenario, Scotland and Ireland would be "close friends, colleagues and occasionally in competition".

On concerns about what effect a Yes vote might have on the peace process, Mr Salmond rejected suggestions that it might destabilise Northern Ireland.

He said the contrary argument could be made where Scotland would be "an exemplar of peaceful change" and an example of how substantial constitutional change could be achieved in a peaceful way.

He said he was looking forward to partnership and equality between nations.

Meanwhile, British Prime Minister David Cameron has made an impassioned plea to keep Scotland part of the union.

During a visit to Edinburgh, Mr Cameron said would be "heartbroken" if the UK was torn apart.

He said he cared "far more" about his country than his party.

Mr Cameron, Nick Clegg and Ed Miliband are all in Scotland on separate visits in a bid to persuade Scots to vote No to independence on 18 September, offering instead a fast-tracked timetable for further devolution.

Mr Cameron said: "I care far more about my country than I do about my party.

"I care hugely about this extraordinary country, this United Kingdom that we've built together

"I would be heartbroken if this family of nations that we've put together was torn apart."

The First Minister said: "The breadth and reach of the Yes campaign is there for all to see, it's not about the Scottish National Party, the Green Party, it goes right through every sector of Scottish society.

"What we're seeing today on the other side is Team Westminster jetting up to Scotland for the day because they are panicking in the campaign.

"We don't make any assumptions about the poll next week, but nonetheless the evidence would indicate that more and more of our fellow citizens are becoming convinced by the arguments being put forward by their fellow citizens in the Yes campaign.

"The movement in Scotland is decisively towards Yes.

"What we are arguing is that we've got a key test about jobs in Scotland, about protecting our National Health Service. Their concern with this last-gasp effort seems to be with their own jobs."

The three Westminster leaders hit the campaign trail after offering a fast-tracked timetable for further devolution.

Mr Cameron had already given his backing to a timetable for transferring more powers that was outlined by his predecessor in Downing Street, Labour's Gordon Brown.

Work towards this could begin next Friday, the day after the referendum, if there is a No vote, while draft legislation could be drawn up by January. 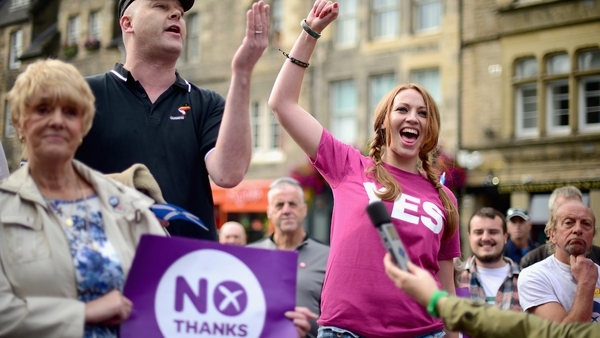 David Cameron to campaign in Scotland for 'No' vote