Northern Ireland's power-sharing government is no longer fit for purpose, the First Minister has warned.

Peter Robinson said Stormont's mandatory coalition led by his Democratic Unionist Party and Sinn Féin could not continue in its current form.

"Unless we face and conquer the deficiencies in our arrangements, we will not be the guardians of a process regarded as a splendid exemplar to the world but rather we will become a cautionary tale, warning of the dangers of drift and dithering," he said.

He said: "Megaphone or media-based negotiations are counter-productive.

"We have overcome enormous challenges in the past by treating each other with a degree of respect. With the support and engagement of the two governments and the US administration I'm confident we can find a resolution to our current difficulties."

Mr Robinson also called for a second take on the 2006 St Andrews Agreement that paved the way for the return of devolution in May 2007, when then DUP leader Ian Paisley and Mr McGuinness became first and deputy first ministers.

He said the Agreement, which included an elaborate system of checks, allowed one party to block changes and provided no significant opposition, was only a short-term solution and called for renewed negotiations involving the British government as well as smaller parties not currently on the five-party Executive.

Mr Robinson added: "We always recognised that compromising effectiveness and efficiency for sound and justified political expediency could not be a permanent feature. It is my view that the present arrangements are no longer fit for purpose."

In an opinion piece penned for the Belfast Telegraph, the DUP leader warned that fundamental disagreement over controversial welfare reforms could be the tipping point. 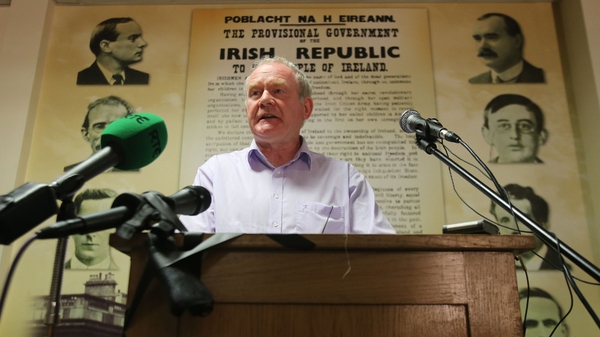