Figures released today from the Department of the Environment outline how wealthier local authorities will subsidise other areas.

12 local authorities, many of them on the east coast, will earn more from the Local Property Tax than they currently get from central funds.

The figures show that 10 of the 12 better off local authorities will be able to pass on the 15% reduction in the LPT in full.

They are councils in the greater Dublin area, Wicklow, Meath, and Kildare as well as Galway City, Cork County, Clare and Kerry.

But Cork City and Kerry could only reduce the tax by around 5% if they were to break even next year.

Elsewhere, Donegal and Tipperary get the biggest top ups from the so called equalisation fund with subsidies of around €13.9m and €12.9m respectively. 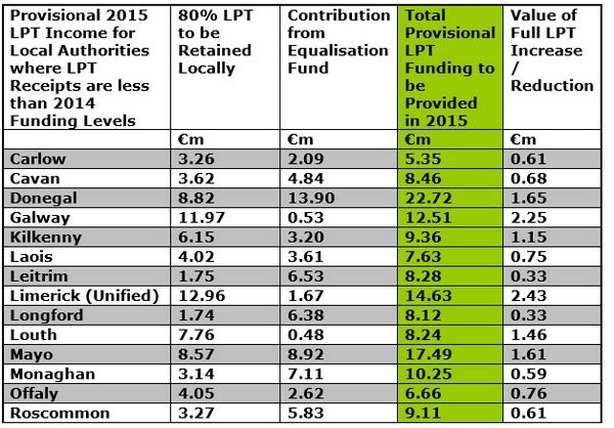 The figures imply that councillors in 21 of the 31 local authority areas will have to decide whether to pass on the full 15% or impose cutbacks in services.

Minister Alan Kelly said the deal, which was organised by an inter-departmental working group, will still allow the better off local authorities to implement the full 15% reduction in the tax they are allowed under the legislation.

From 2015, councils will also receive 80% of the proceeds of the tax directly, the other 20% will go to a central fund and will be distributed to councils who receive less.

Overall this means that some councils, particularly in the capital but also in other parts of the country, will get more revenue from the tax as they have bigger populations and higher property valuations.

In turn this will enable them to lower the rate by the full 15%.

Mr Kelly said no local authority is worse off from the baseline they were at in 2014 under the plans for the distribution of the property tax.

Speaking on RTÉ's News at One, Mr Kelly insisted the approach to the distribution of the property tax was fair and balanced.

He said: "No local authority across the country is worse off from the baseline they were at in 2014.

"And it is, we believe, a very fair implementation of the property tax. And indeed in a number of areas where there is a very high volume of property tax, local authorities...will gain."

He was commenting following the release of details on how wealthier local authorities will subsidise other areas.

He said 19 local authorities would form part of the re-distribution fund.

Minister Kelly said the total amount of funding redistributed to these 19 local authorities would be about €101m.

He said the principle of having 80% of property tax revenue retained and used locally had been achieved.

Fianna Fáil's Barry Cowen has claimed that no council will be able to reduce their property tax rate next year by 15%.

He described Mr Kelly's claim that up to ten better off councils might in a position to mitigate the measure as a "pig in a poke and a three card trick".

He said many councils will not be able to meet the statutory requirements needed to make the reduction.

Mr Cowen also said that local authorities do not yet have the information needed to outline the impact on services that any reduction might have as set out in the legislation.

Cork City Council will vote on 29 September on whether or not to reduce the LPT.

The council’s head of finance, Tim Healy said: "At the moment the council is in a neutral position. We're only making marginally more from the Local Property Tax than from central funding, so if property tax was reduced then council would have to start cutting services." 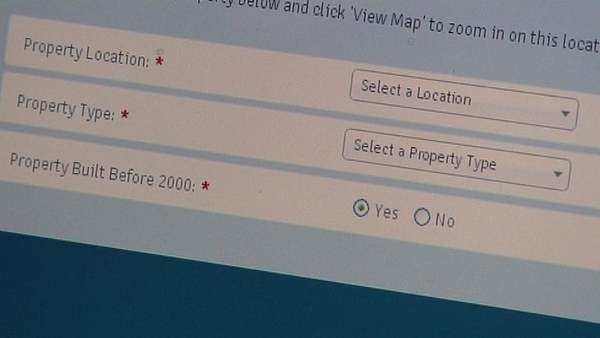