Exploratory talks between representatives of Greyhound Recycling company and SIPTU have adjourned at the Labour Relations Commission.

No date has been set for a resumption of the negotiations in a dispute that began 12 weeks ago when the company imposed wage cuts of over 30%.

Workers who have since been officially declared on strike have been blockading the company's depot despite a High Court injunction.

Management says the blockade is affecting collections from 140,000 customers.

Greyhound Recycling has imposed pay cuts of 35% but claims this would still leave workers 10% better off than the industry norm.

The workers say they cannot accept a wage cut of that amount.

The company's owner has said that he is willing to negotiate on wages.

Speaking ahead of this afternoon's talks, Michael Buckley warned that Dublin is facing a waste crisis because the company's 40 trucks are unable to complete collections.

SIPTU representative Henry O'Shea said the actions of the workers are nothing to do with the union.

He said the workers had entered talks in the hope of reaching a deal that would allow them to return to work. 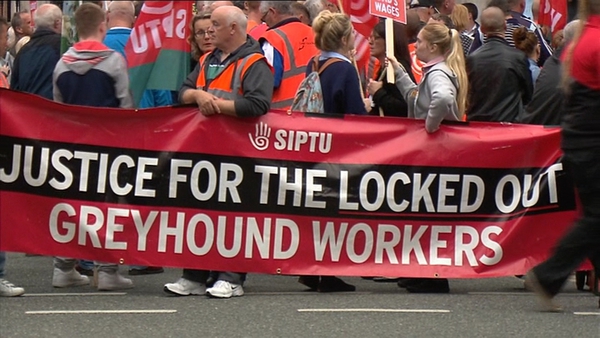